Even (and especially!) if you’re not interested in the typical war museum, the Churchill War Rooms are worth your time and your dosh. Illuminating the daily terror of living through World War II, this museum follows in the footsteps of Britain’s beloved prime minister during some of this country’s darkest days. 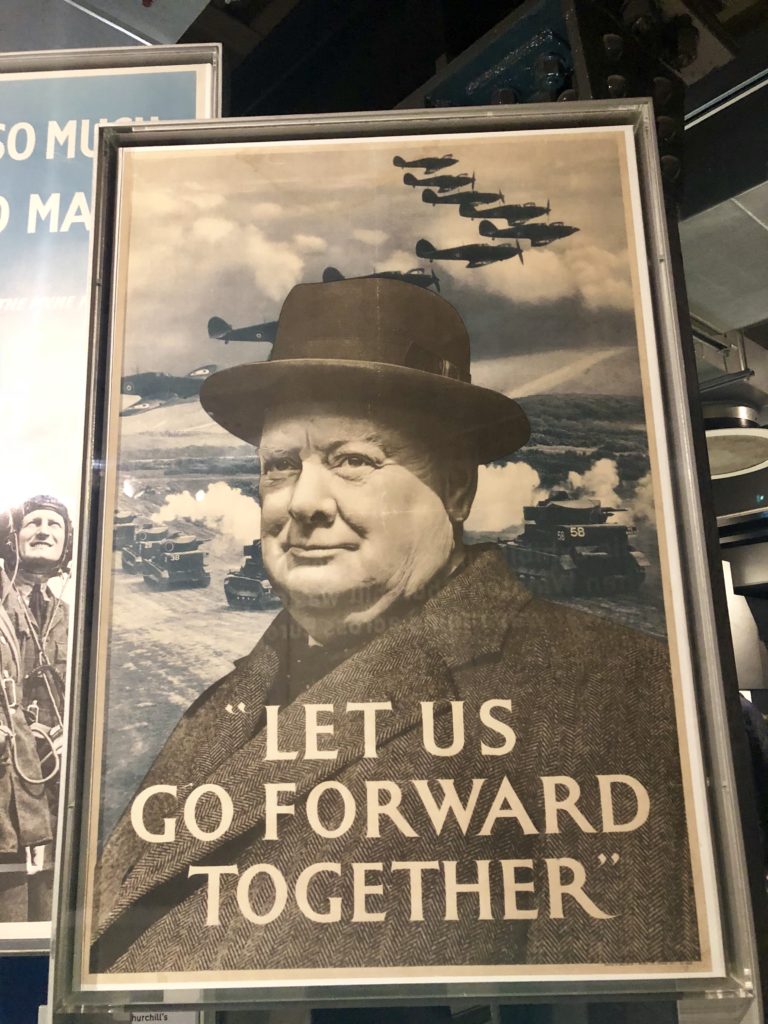 Hindsight is 20/20, and it’s easy for us to forget (and impossible for a lot of us to know) the seemingly never-ending nightmare that was living through World War II, even though of course the outcome is obvious today. Constant air raids during the Blitz destroyed whole London neighbourhoods (a blue plaque on the railway bridge near my old house in Mile End commemorates the first ‘doodlebug’ bomb dropped on the city), and tens of thousands of people were forced to find shelter underground in caves or in Tube stations.

The nerve centre of Britain’s response to the growing threat of Nazism across the English Channel was surprisingly close to the iconic potential targets of the Houses of Parliament and Whitehall. Abandoned after victory was declared, the Churchill War Rooms are better than a recreation: they are the actual pieces of the wartime history left behind by those who worked day and night in this underground bunker, including from Prime Minister Winston Churchill himself. 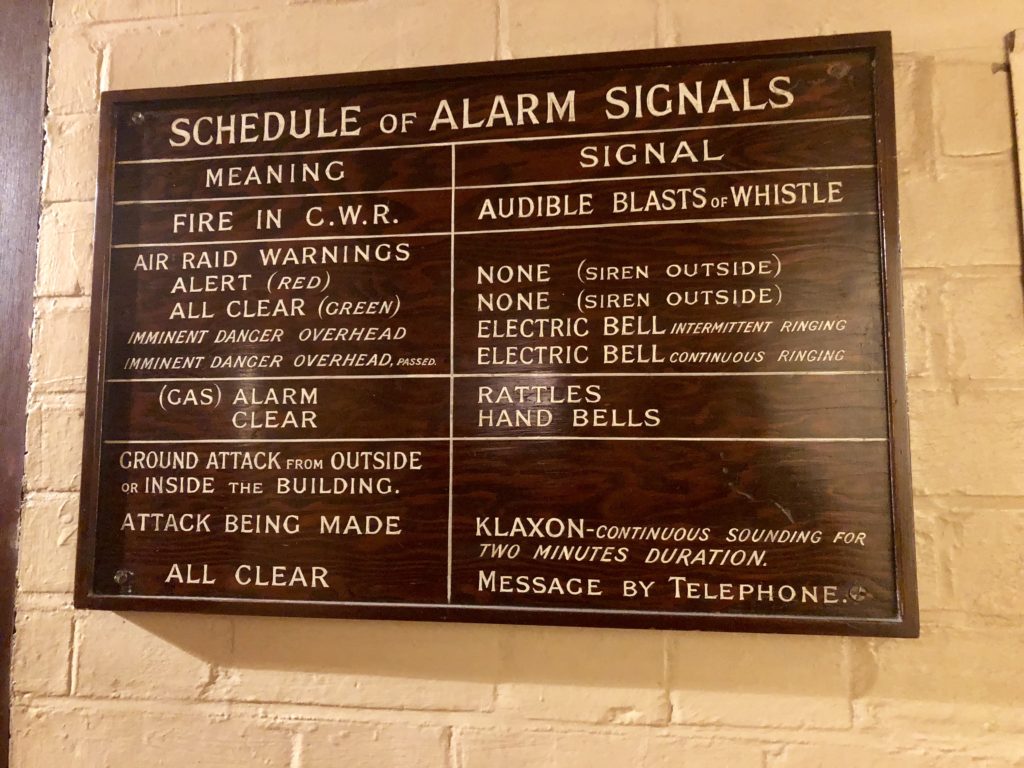 In a city that’s filled with fabulous free museums, stumping up more than £20 for entry can feel like a slap round the wallet, so steel yourself. There are a few options to ease the pain: book online in advance for a slightly cheaper price (which also means getting to jump the queue, and unlike the other museums, there WILL be a queue), or you can get 2-for-1 entry if you buy a train ticket (which can be as little as £2), though you’ll be waiting outside in the rain like everyone else. Choose wisely. 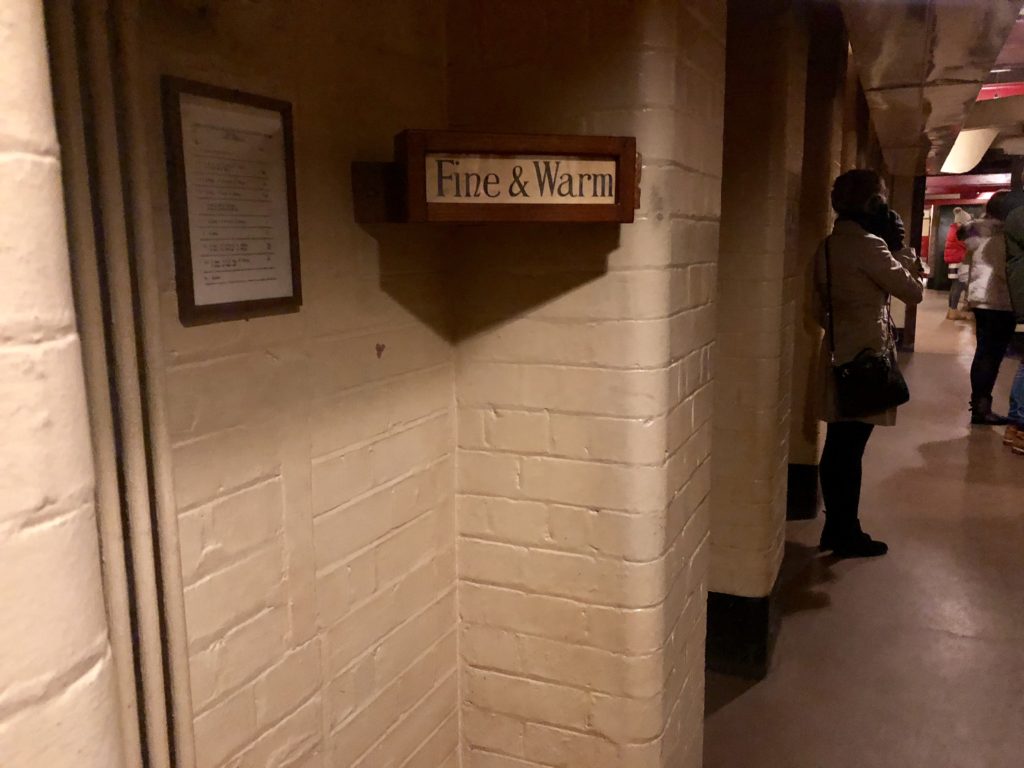 Descending down the stairs and through the corridors makes you appreciate the select few who had the fortitude to call this home, and you can only imagine how the narrow spaces must have highlighted Churchill’s demanding personality even more. Even in this bustling underground colony, there are still many signs of life from above: from signs indicating the weather (fine & warm) to signs indicating what else might be raining down upon the city.

Sleeping quarters butt up against meeting rooms and the mess hall. A new extension houses the comparatively huge Churchill Museum about various parts of Churchill’s life, and it even features his velvet one-piece boiler suit and some half-smoked cigars. 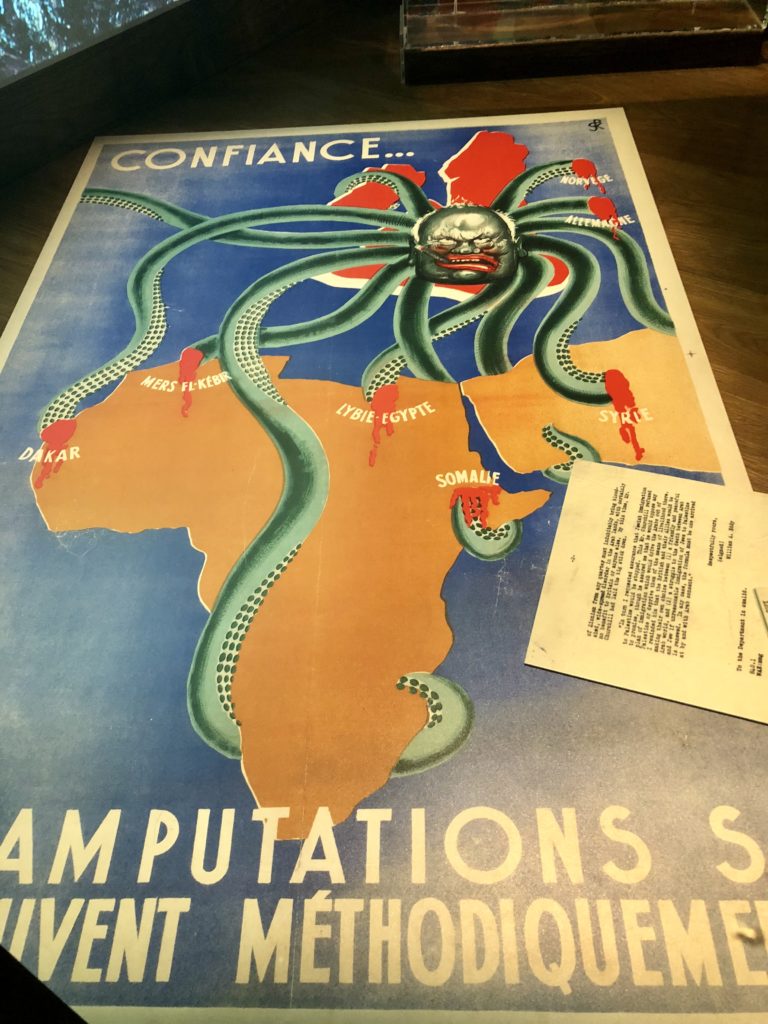 Most fascinating to me was the small room about Churchill’s time before becoming prime minister when he was Secretary of State for the Colonies, meaning that he was hugely influential in the creation of the Middle East as we know it today (he literally made Jordan as he boasted ‘with the stroke of a pen, one Sunday afternoon in Cairo’, now hilariously referred to as Winston’s Hiccup or Churchill’s Sneeze). 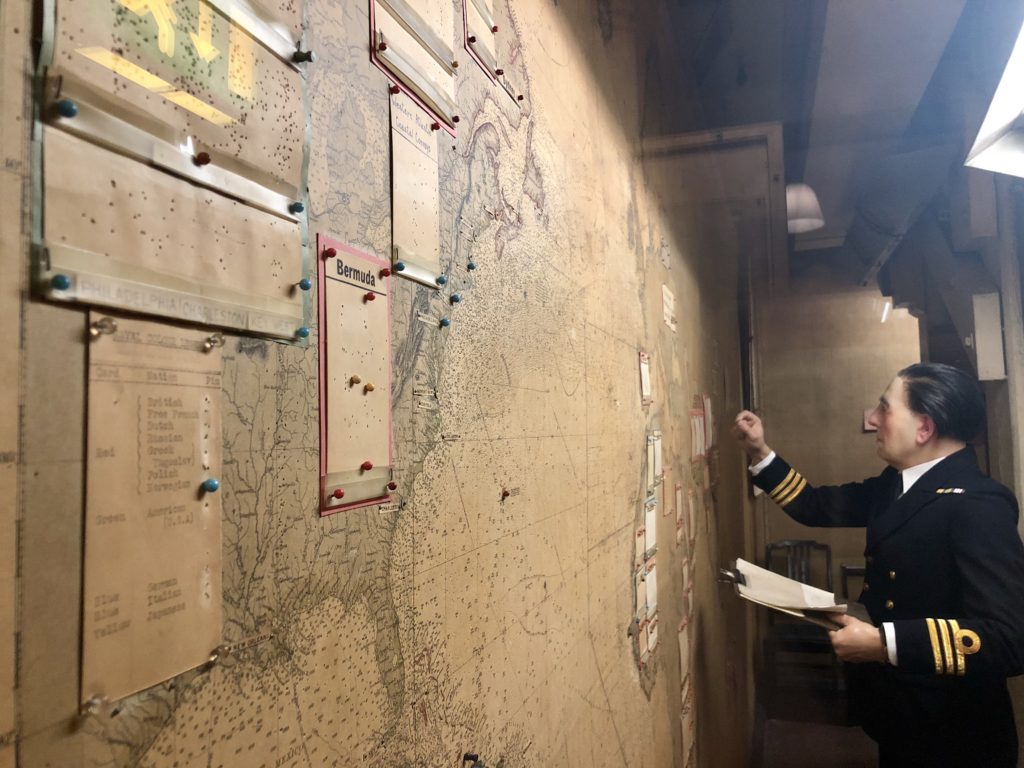 After time-travelling through the other parts of Churchill’s life, you’ll come to the museum’s grand finale: the wonderful Map Room, where the exact coordinates of movements by enemies and Allies were charted with precision for six years. Floor-to-ceiling maps pricked with thousands of tiny pinholes line the walls, and a bank of desks with scrambler telephones for secret conversations runs through the middle of the room. 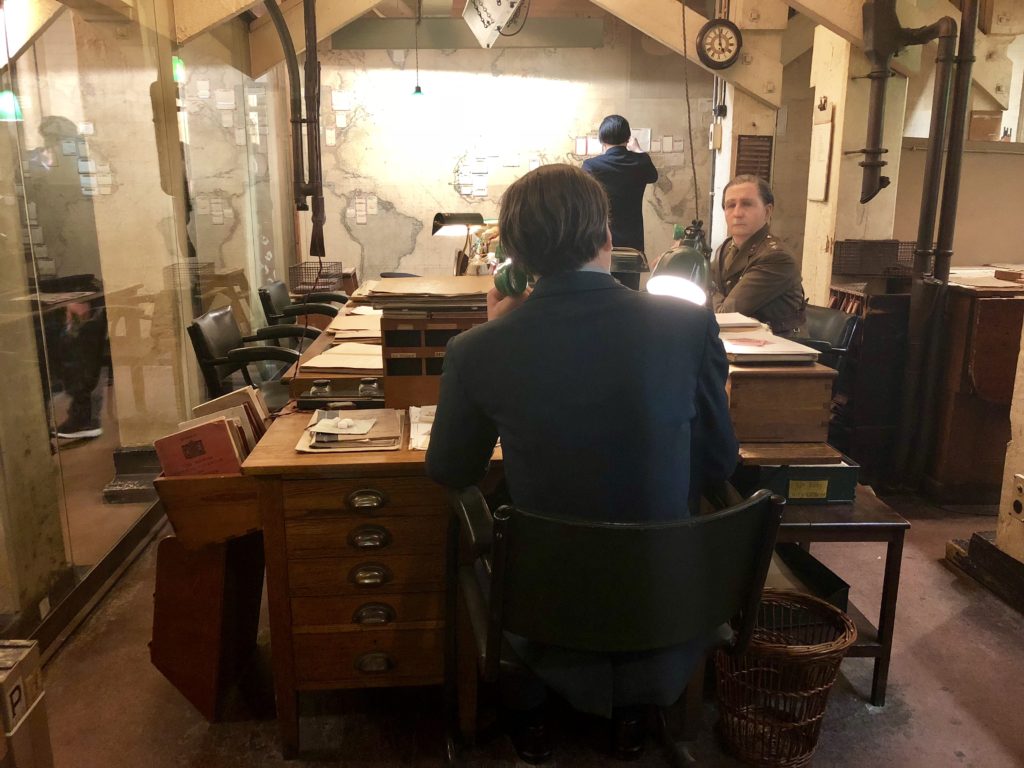 Beyond is Churchill’s bedroom, where he stayed the night a grand total of three times and where he would address the nation via BBC radio.

I loved comparing the Churchill War Rooms to the Dollis Hill Underground Bunker, the Cabinet War Room ‘understudy’ out in the London suburbs should the original was ever destroyed by bombing, which I visited during Open House London a few years ago. Winston Churchill hated the idea of leaving central London, and once the Blitz started, he toured the new bunker, which was codenamed Paddock, but he told his aides and wrote in his memoir that he thought it was a dump (!) and didn’t want to stay there. Paddock was tested out twice, including when Churchill chaired a full meeting of the cabinet, but it was never used for its intended purpose and was essentially left to disintegrate. 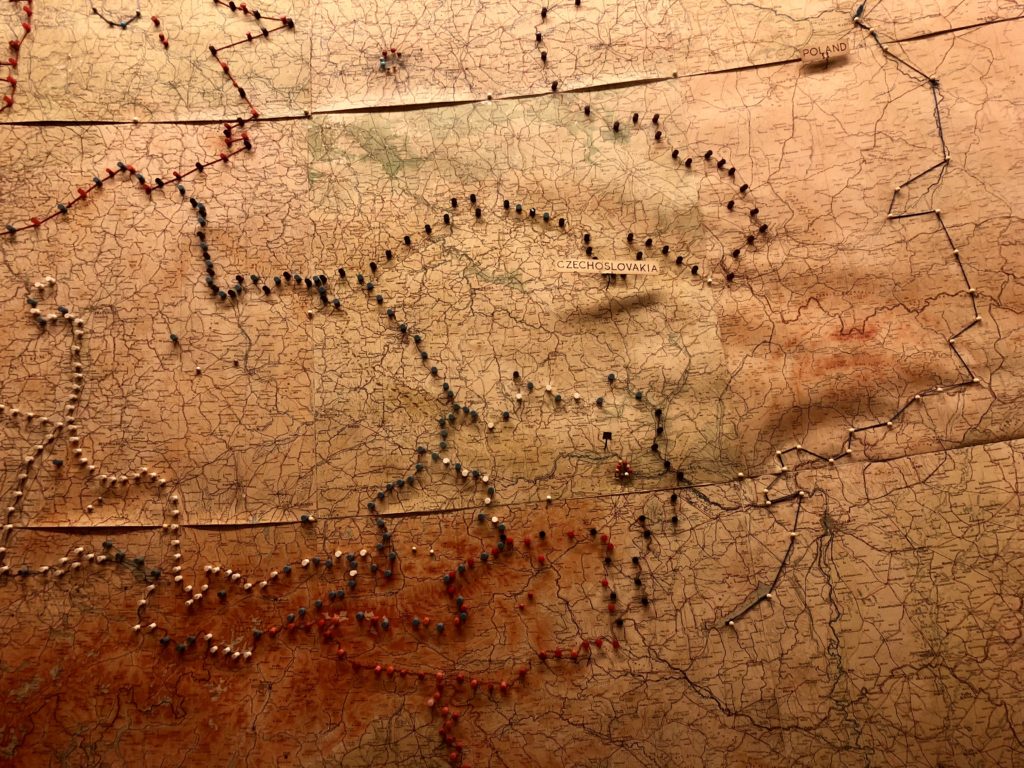 Unlike Paddock, the Cabinet War Rooms were in use all day every day until August 1945, when the Map Room lights were switched off for the first time in six years. The lights were then flicked back on four decades later for us tourists to shuffle through silently, just at the volume level that Churchill would have liked.

For being tourist central, this area is unfortunately dire on the food-and-drinks front. If you’re a Londoner, you’ll likely be having heart palpitations over how long you’ve already spent in the crowded awfulness of Zone 1 on a weekend. If you need a pint to calm the nerves, St Stephen’s Tavern just across from Big Ben and next to Westminster Tube station can be nice-ish if you time it right, but it’s unlikely to help your agoraphobia.

Instead, head toward Victoria and stop at the Albert, one of the last remaining Victorian gin parlours in the area, now Grade II listed. The yellow-and-red brick facade is a striking contrast to the looming glass skyscrapers surrounding it on nearly every side. The Blitz bombs didn’t destroy this pub’s hand-etched frosted glass, so you can still sip a G&T under its gorgeous ornate ceilings.