There’s something magic about King’s Cross.

Maybe it goes all the way back to the first century AD when legendary leader Boudica led the native Britons in a revolt against the invading Romans. It’s said that her body is buried between Platforms 8 and 10 under what’s now King’s Cross station.

Maybe it goes all the way back to 1997 when Harry Potter caught a train from Platform 9 3/4 on his way to Hogwarts. Now you can watch tourists miss their trains, waiting for the chance for a “scarf attendant” to hold them back from getting sucked into the vortex.

No, maybe it’s as simple as the fact that I’m drawn in by the bright lights of the city, the rush of everyone around you trying to get somewhere else or the solitude of those quiet places you discover where they are least expected.

This redevelopment is so new that it now has its own postcode, and the streets’ names will be chosen through a competition. King’s Cross was once London’s red light district, but property companies have swooped in to rescue and redevelop one of central London’s last major brownfield sites.

The only red lights you’ll find now are in the 1,080 choreographed water spouts that dance to a silent tune in Granary Square, just a few minutes’ walk north of the station.

As I was strolling through Granary Square that evening, someone stopped to ask me if I would hang around for a few minutes because some students would be performing martial arts in the fountains.

[I’d make a GIF of the video I took of this if I could figure out how.]

Kerb, the delicious food truck market, also has a near-permanent setup in the area, including a truck that serves Kansas City-style BBQ. Prairie Fire, I promise to visit you as soon as possible.

Our first visit to Granary Square was during the King’s Cross Journeys Festival a few weekends ago, and we stopped for lunch at the Filling Station, a gas-station-turned-restaurant that’s slated to be torn down next year as the bulldozer of redevelopment heads this way. 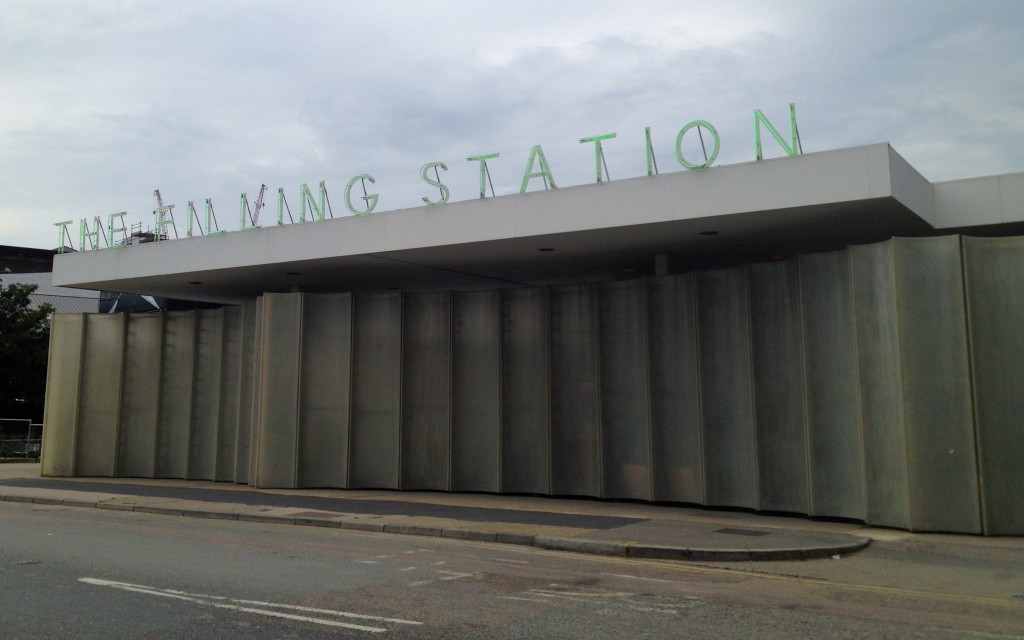 King’s Cross and Granary Square definitely have a lot going for them, but they aren’t yet destinations in their own right. While it’s obvious that the property developers wanted to provide a lot of space for people to enjoy, I wouldn’t go out of my way to be here.

Not yet anyway. A few more restaurants, a few more bars, a few more pubs coming in will probably change that very soon.

Question for grammar nerds — all others turn back now — how do we feel about the apostrophe in King’s Cross? I’m not a fan of it, but since the 1,000 Things book used it, I felt obligated to be consistent. Londonist had a whole piece about this one apostrophe, so it’s apparently a worthy debate that no one has officially settled yet.