Brompton Cemetery, a Victorian-era graveyard opened in 1840, is one of the Magnificent Seven cemeteries that used to sit on the city’s outskirts but have now been engulfed by this ever-expanding metropolis. 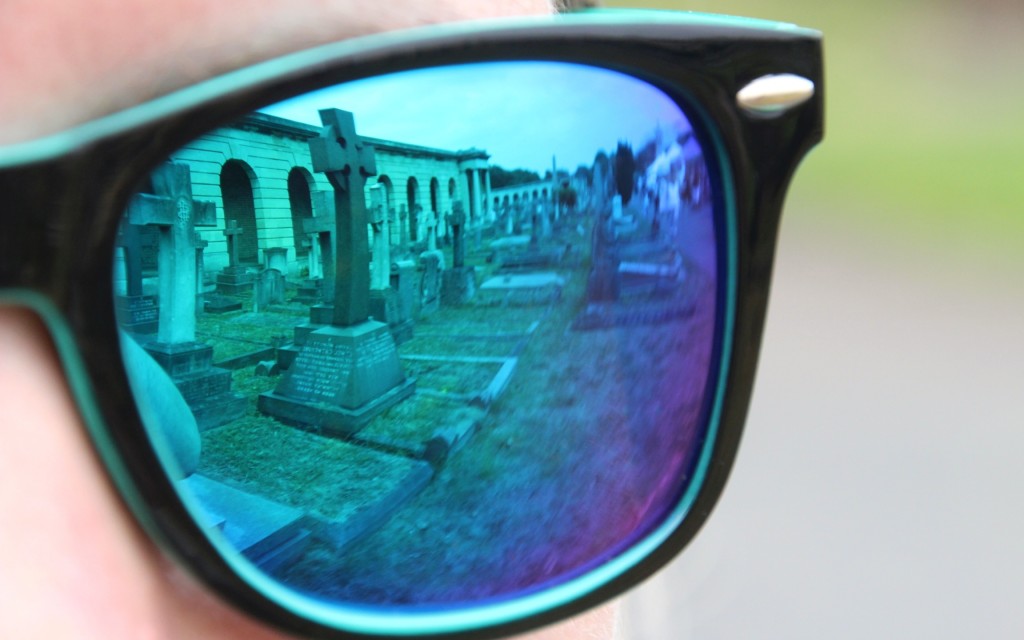 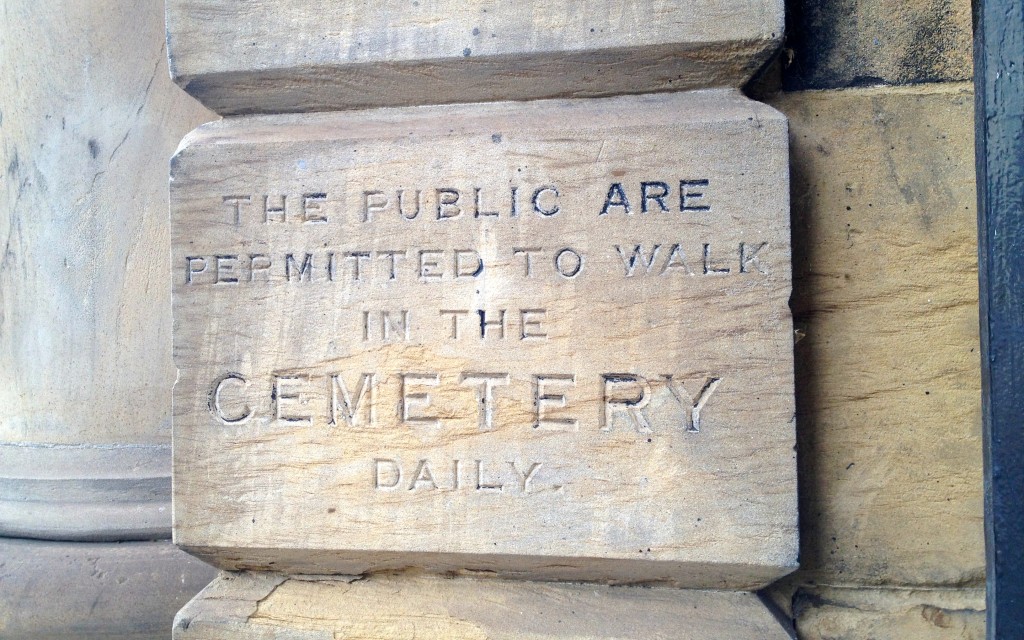 London Thing 623 of 1000: Wander through Brompton Cemetery, one of the Magnificent Seven.

Is it weird to visit a cemetery as a tourist attraction? But it has its own TripAdvisor page…

The Victorians hoped that the massive cemeteries of the Magnificent Seven would reduce the overcrowded burial grounds in the small parish churchyards around London. By the time Brompton Cemetery was established, London’s population had nearly doubled from 1 million to 2.3 million people in just 50 years. Decaying matter from the cemeteries was infecting London’s water supply, causing widespread epidemics.

Inspired by the garden cemetery style in Paris, architect Benjamin Baud designed Brompton Cemetery to feel more like an open-air cathedral or park than a graveyard. Central Avenue (yes, it’s actually called that) runs down the middle, wide enough for two carriages to pass and leads to a chapel, meant to be a slightly less grandiose version of St Peter’s Basilica in Rome. 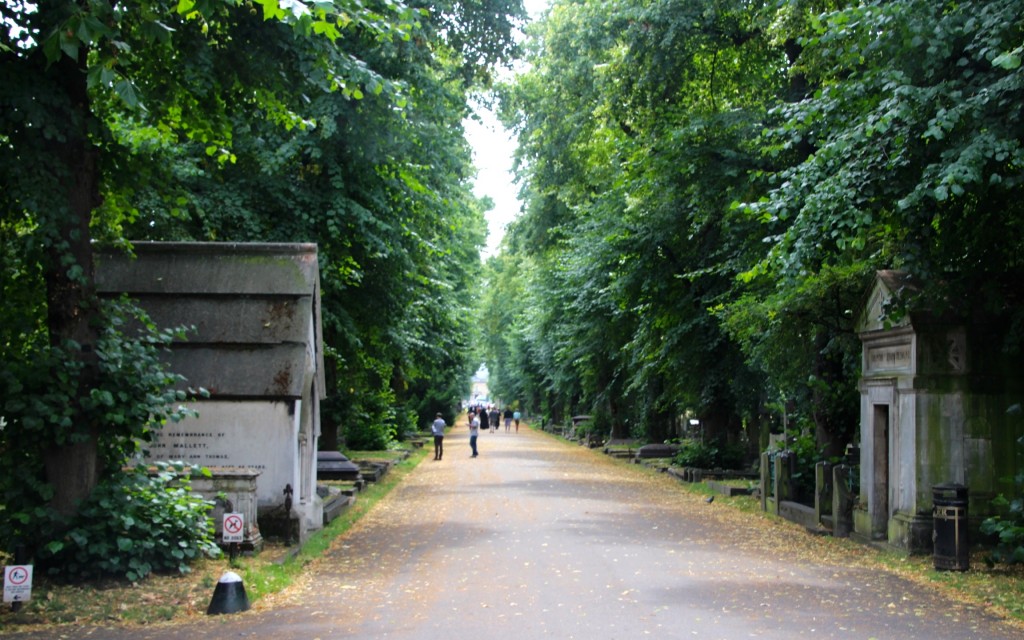 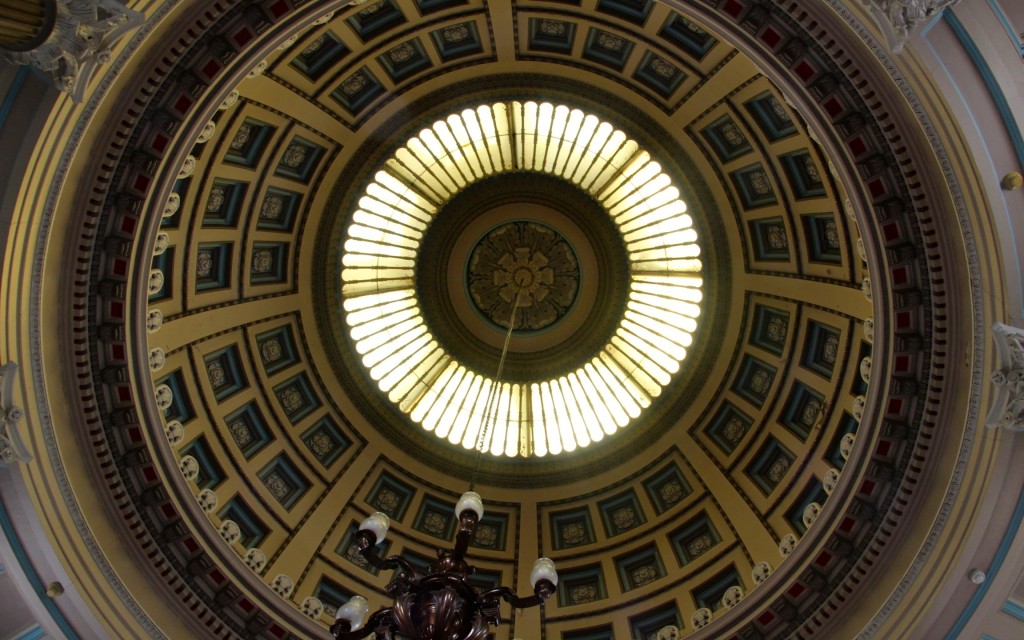 Brompton Cemetery wasn’t the first of the Magnificent Seven to be established, nor is it the first in the 1000 Things list, but it was the first one that I managed to stop by on its annual Open Day, meaning that we got to explore the cemetery’s catacombs as well as the grounds. 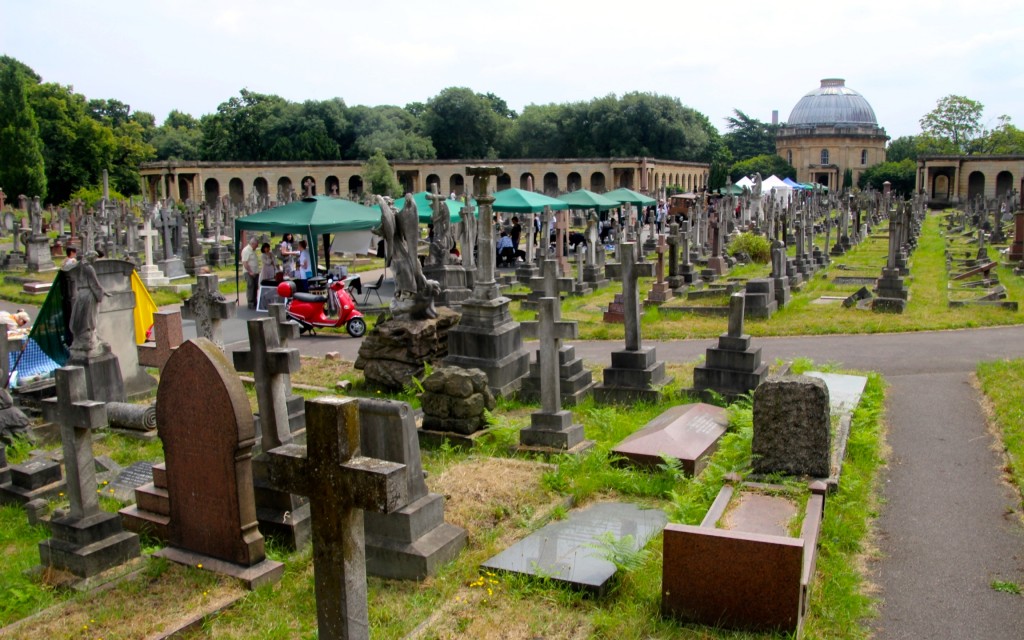 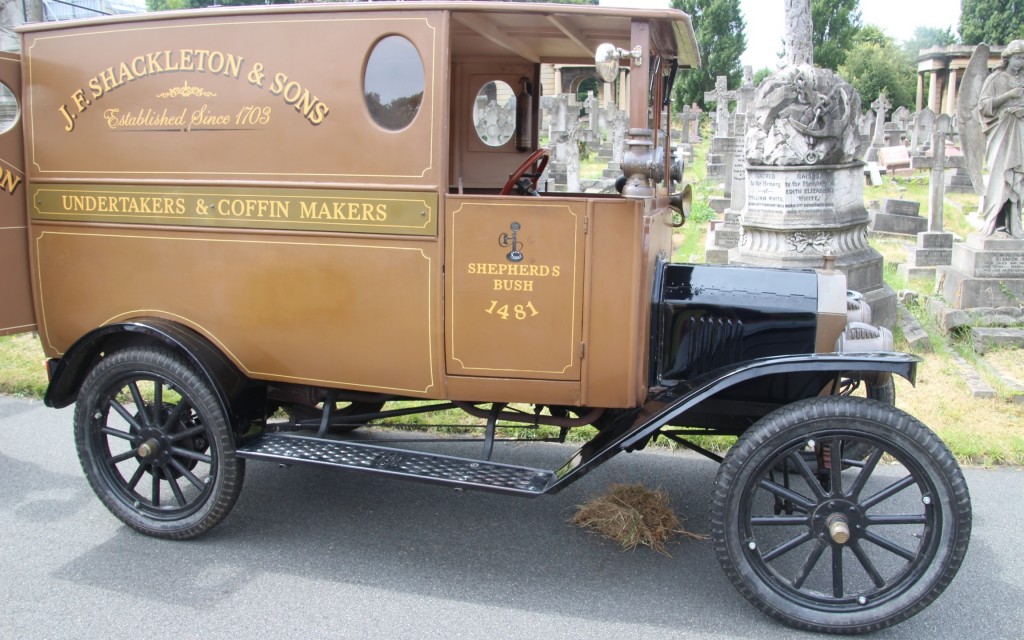 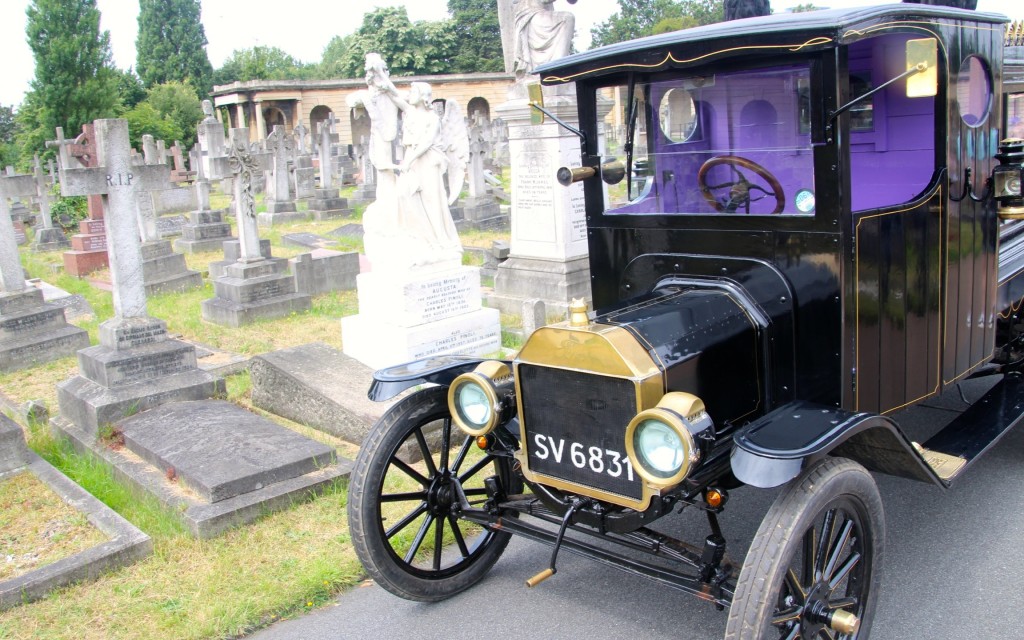 First up was a guided tour of the grounds. Brompton Cemetery holds more than 35,000 monuments, so we were sure to be in for some good stories and (slightly) famous names.

Brompton Cemetery was founded by the West of London and Westminster Cemetery Company, a private for-profit business, not by a church and not by the government (though the government did step in to rescue it from financial ruin 12 years after it opened).

Not surprisingly, plots near the Central Avenue fetched the highest price tag, and the Victorian Londoners who snapped them up built mausoleums the size of small homes to house their family in the afterlife. 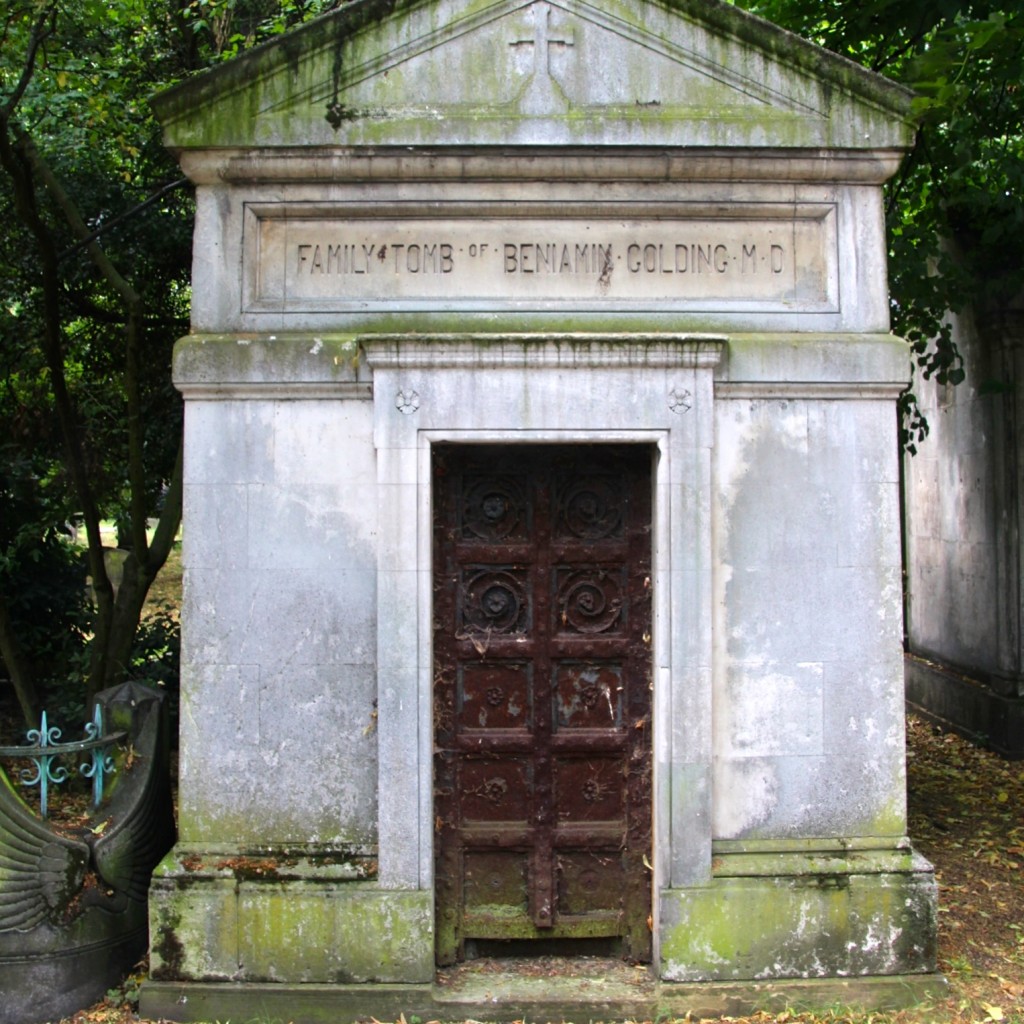 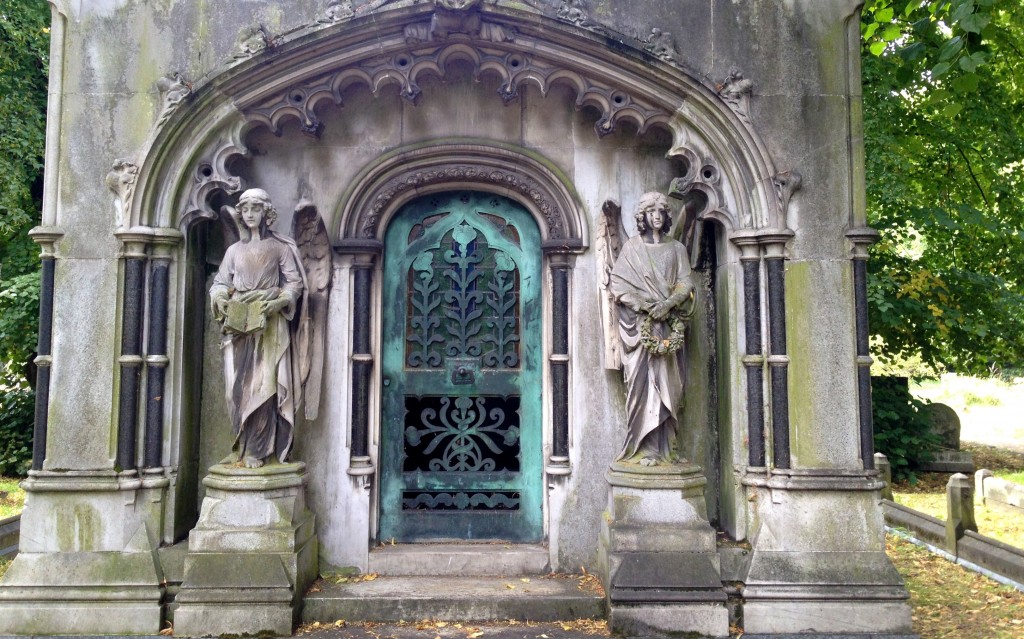 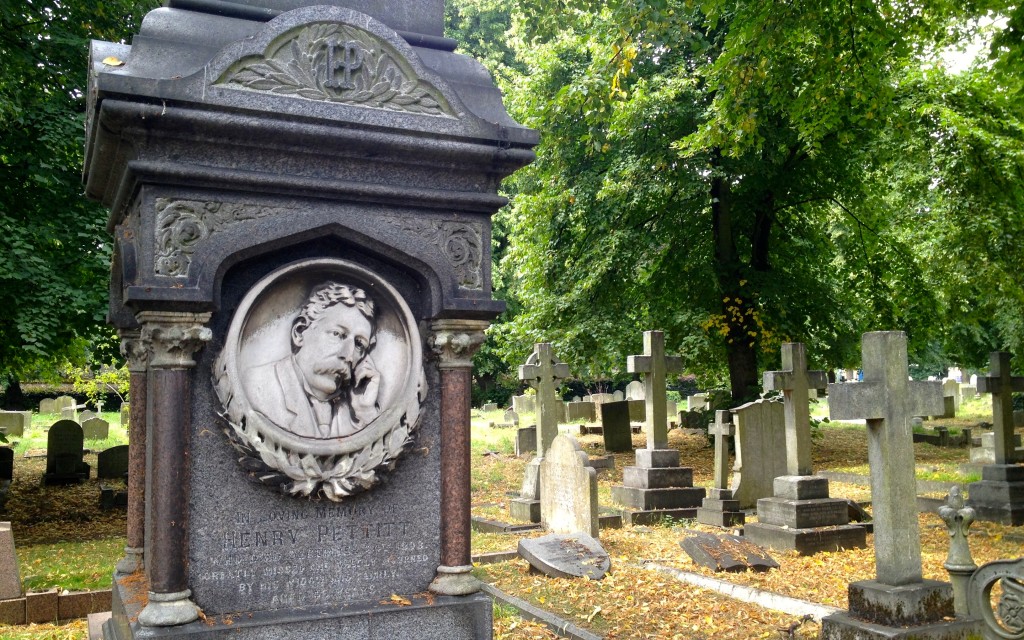 To maximise profits, the cemetery company offered plots to both Anglicans and ‘dissenters’, a broad-brush term that encompassed everyone who didn’t set foot in the Church of England, though land for the dissenters lined the outskirts of the cemetery only.

The tombs at Brompton Cemetery are beautiful, but most are rotting in various states of decay, giving the graveyard a spine-tingling eerie feel, even in the middle of the day. 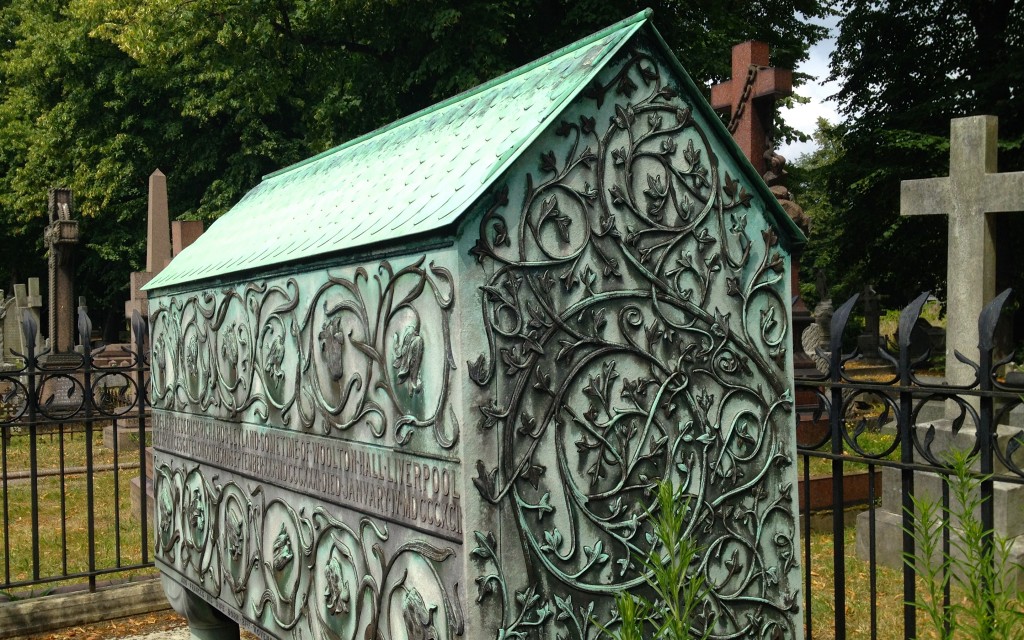 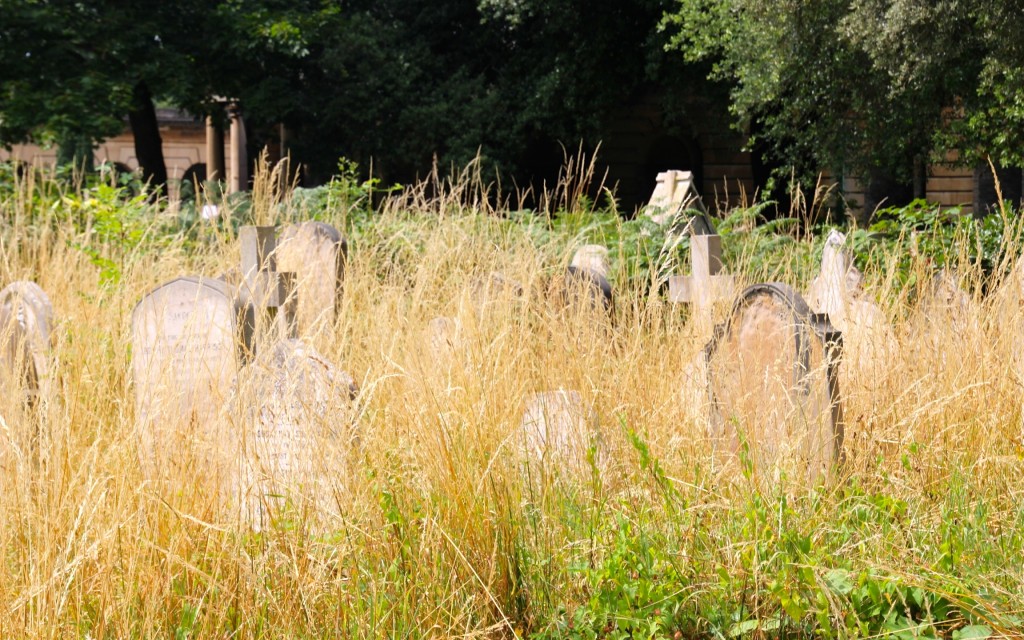 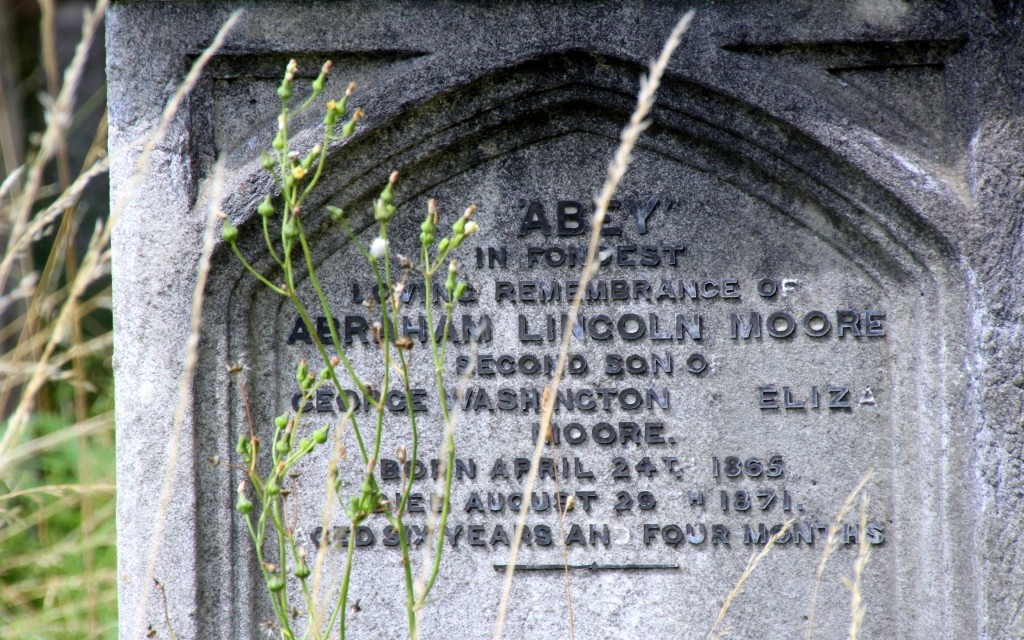 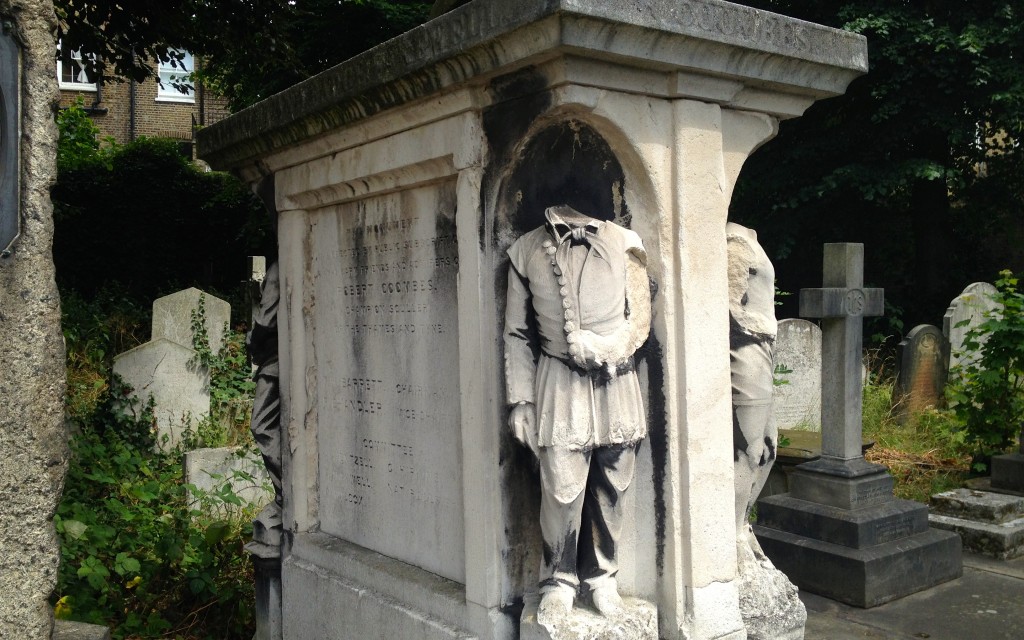 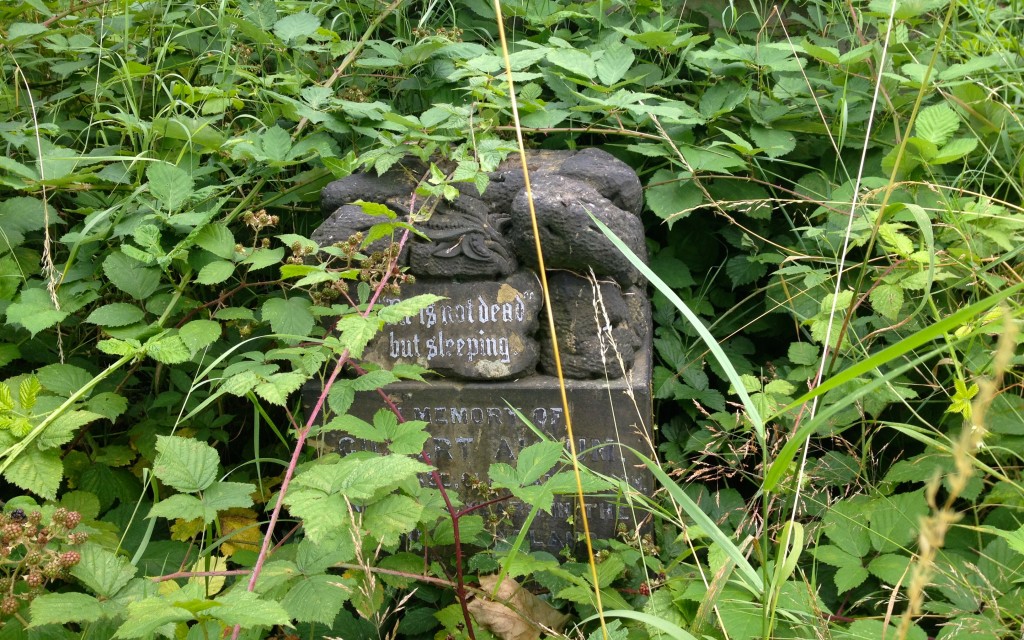 Behind each of the gravestones hides a story, and even by looking at the name, you wouldn’t get the full picture.

The best of these we heard was about a Native American Sioux chief called Long Wolf who was part of Buffalo Bill’s Wild West Show. Long Wolf died of pneumonia during their European tour in 1892 and was buried in Brompton Cemetery.

More than 100 years later, a Brit discovered this history and petitioned to have his remains taken back to his tribe’s ancestral burial ground in South Dakota. The grave site has since been resold, but if you pay close attention, you can see the tribute to the plot’s former occupant. 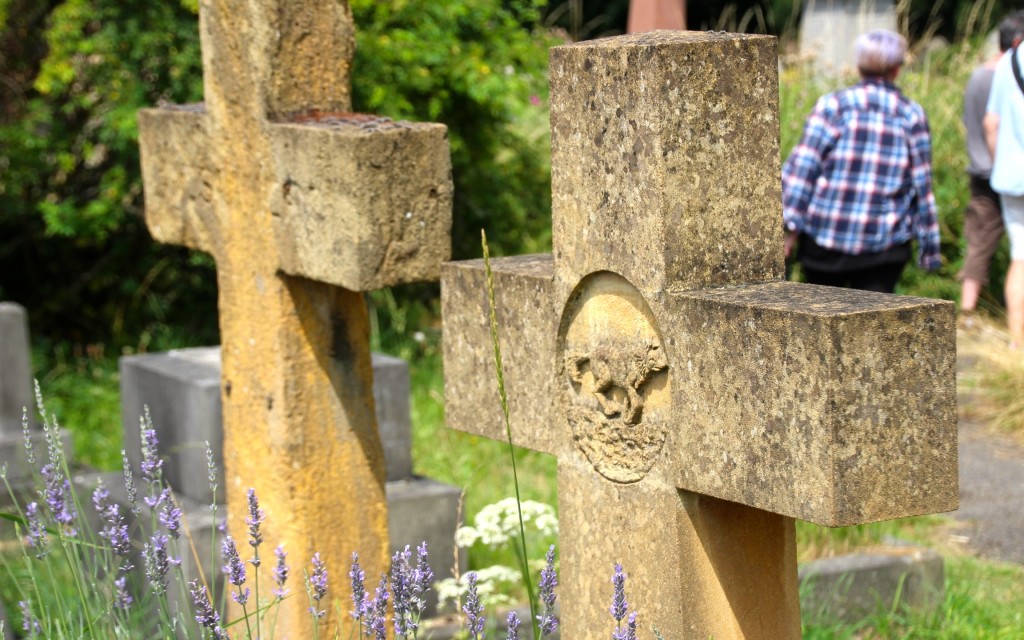 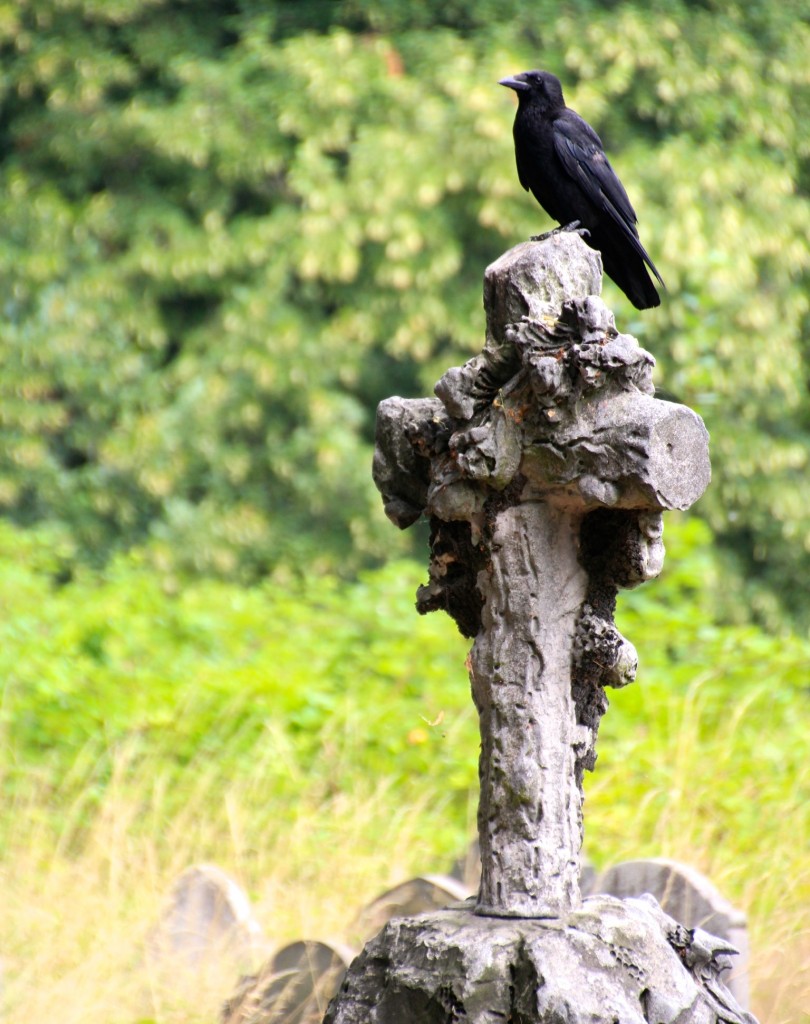 Under a colonnade that forms a circle before the chapel lies the catacombs. Only one section of the catacombs are open to the public once a year because they are in such a state of disrepair. 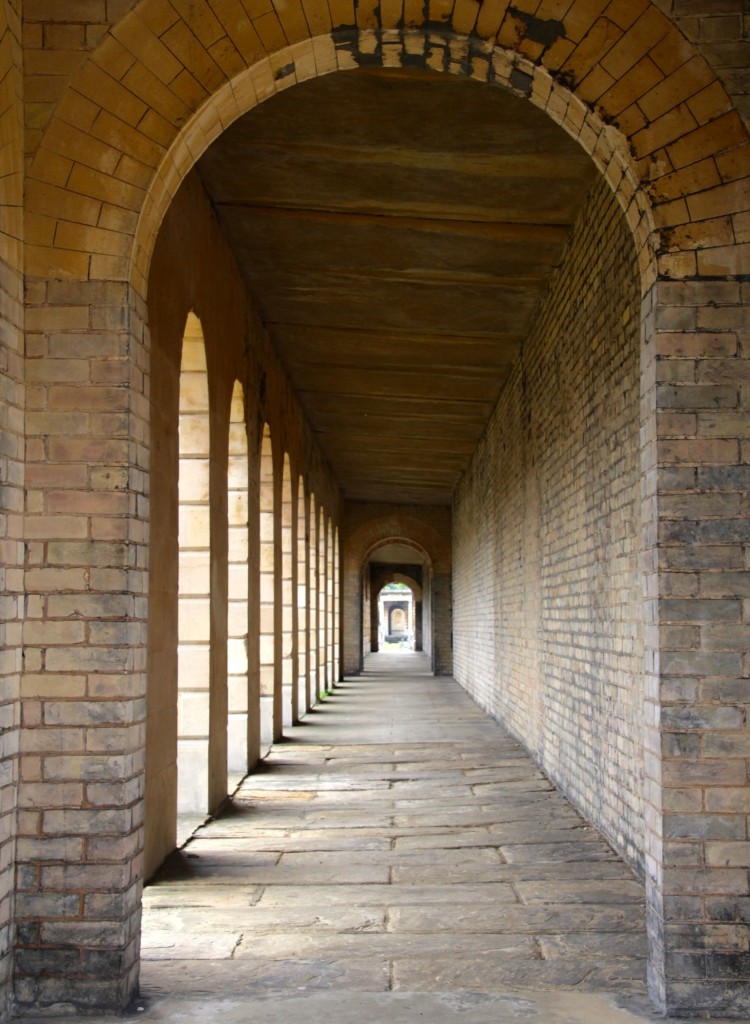 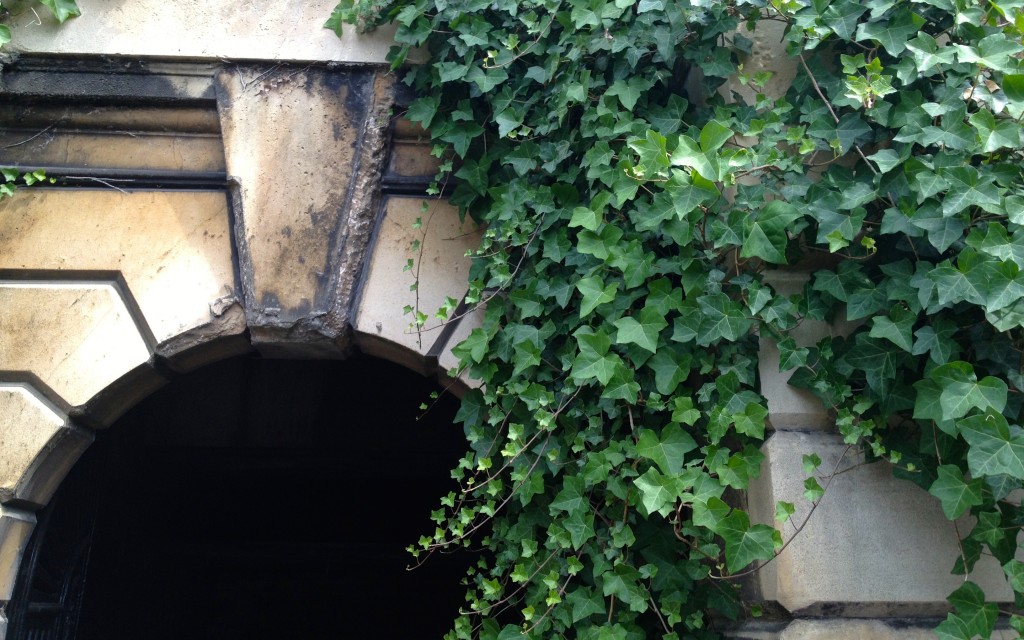 More than 3000 spaces were built in the catacombs, but only 500 or so were ever sold. We’re led down the sloping ramp into the dank, dark room, and we linger until our eyes can adjust to the flickering candle light.

Inside we’re surrounded by coffins and empty spaces where they should be. 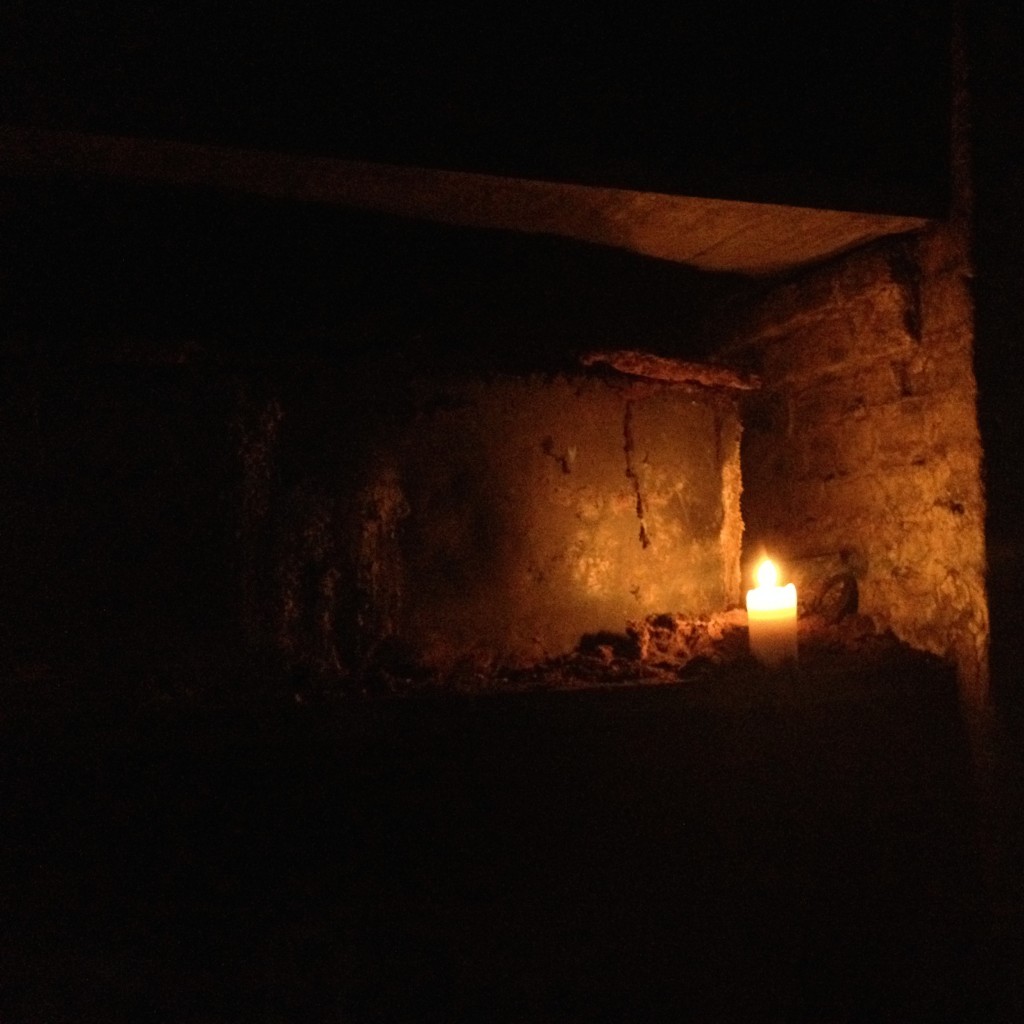 The outer wooden layer of most of the coffins has sloughed off, as if it were some unnecessary layer of skin, and it dangles in threads that barely prop up the plaque with the name of the deceased inside.

(Ianvisits has a great photo of the inside of the catacombs if you want a better peek.)

The tour of the catacombs was short but easily the highlight of our visit. 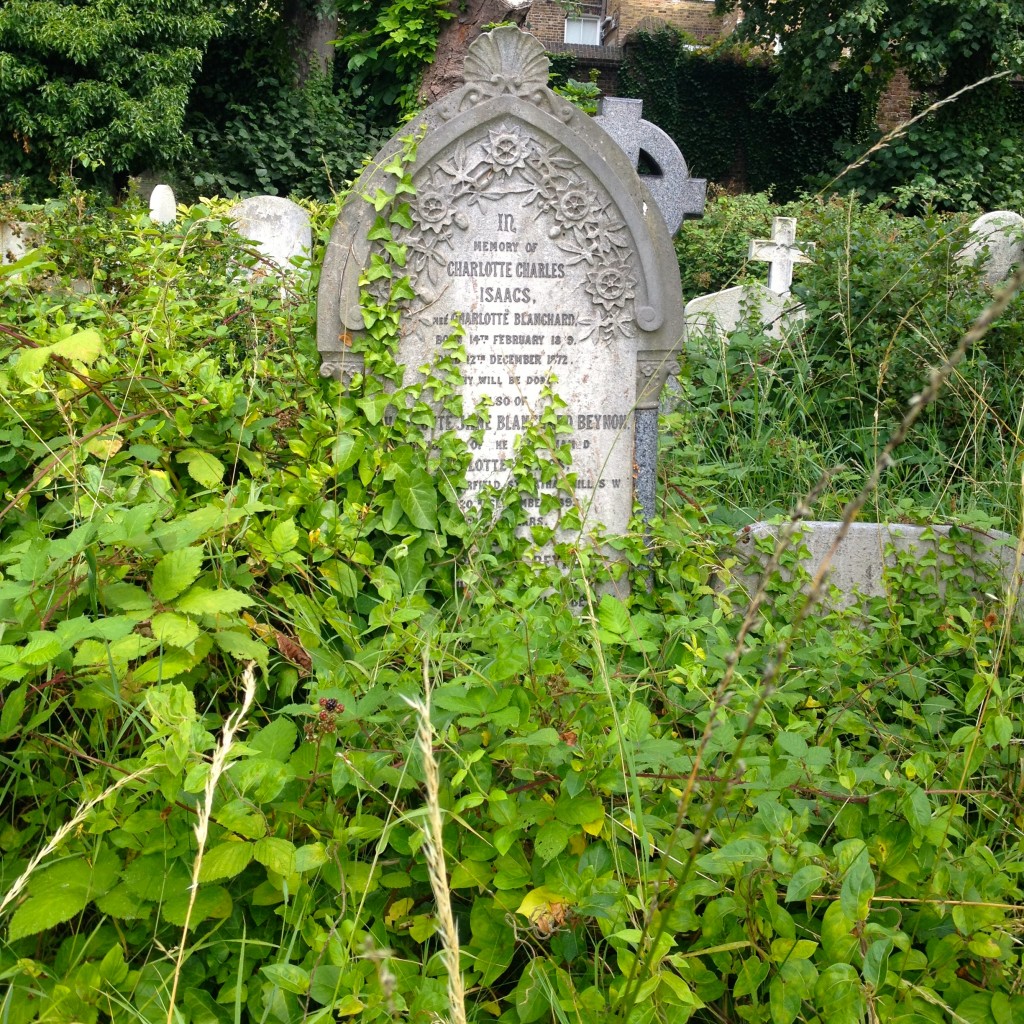 Today, the cemetery seems more alive than you’d think a place like this could ever be.

Brompton Cemetery has been used as a backdrop to a range of films, like Sherlock Holmes and Johnny English, and Beatrix Potter plucked out the names for her animal characters in her children’s books from the cemetery’s headstones.

Most Londoners today just cycle, run or walk their dog right through, but if you linger long enough, Brompton Cemetery will really grow on you.