London Cocktail Week is a little like Open House London, but for boozehounds. Your objective? Drink your way through as many of the 250 bars scattered around the city as you can stomach in seven days. Give up early and concede defeat if you must.

2016 was my third round of London Cocktail Week-ing, so I’m starting to feel like something of a veteran. I’m sure my liver is too.

This glorious event is the perfect excuse to explore boozy London and discover your new favourite bar that you’ll spend the rest of the year in (here’s to you, Discount Suit Company – found my first year when it was probably the only place in Zone 1 you could get an expertly made cocktails for £6.50.) 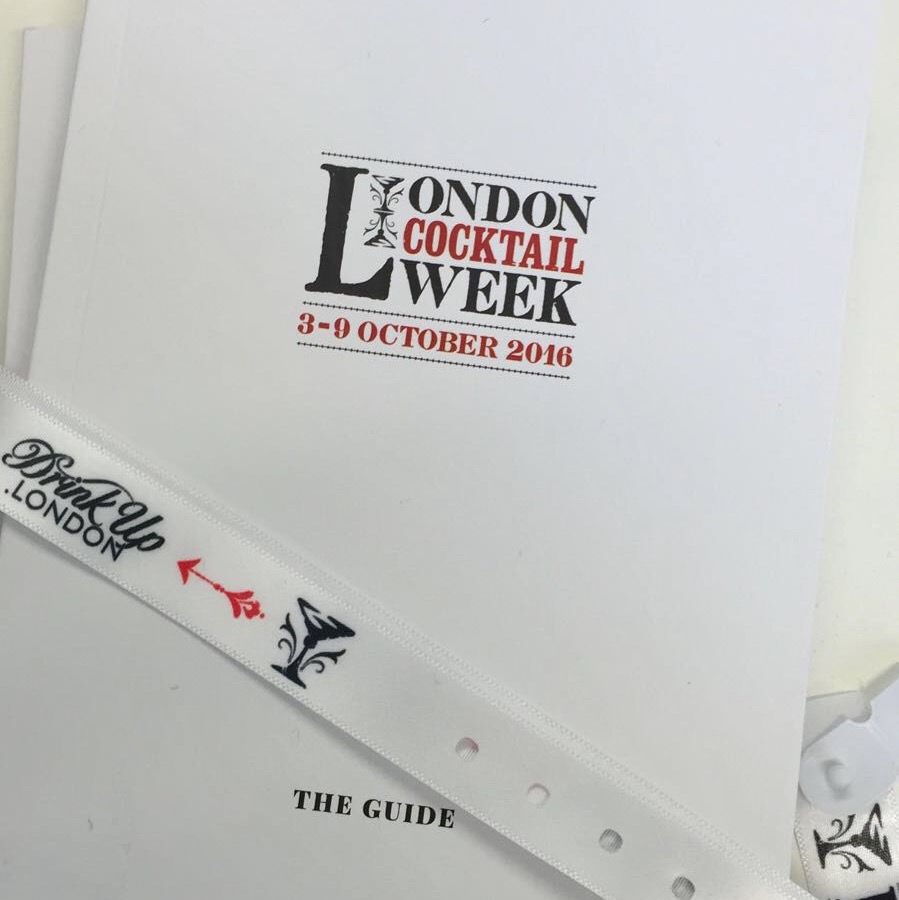 LCW is essentially a festival of drinking. In previous years, you had to buy a wristband that, annoyingly, you’d have to pick up at one of a few designated spots in London. For 2017, London Cocktail Week has finally gone digital. Buy a discounted pass from Time Out London (50% off at £5 instead of £10), download the Drink Up London app, make an account, take a horrific selfie that’s used as your ‘pass’ and make your way around as many of the 250 bars as possible, you know, to get your money’s worth.

In each bar, you’ll ask for the special London Cocktail Week cocktail for £6 and show that picture of your beautiful self. 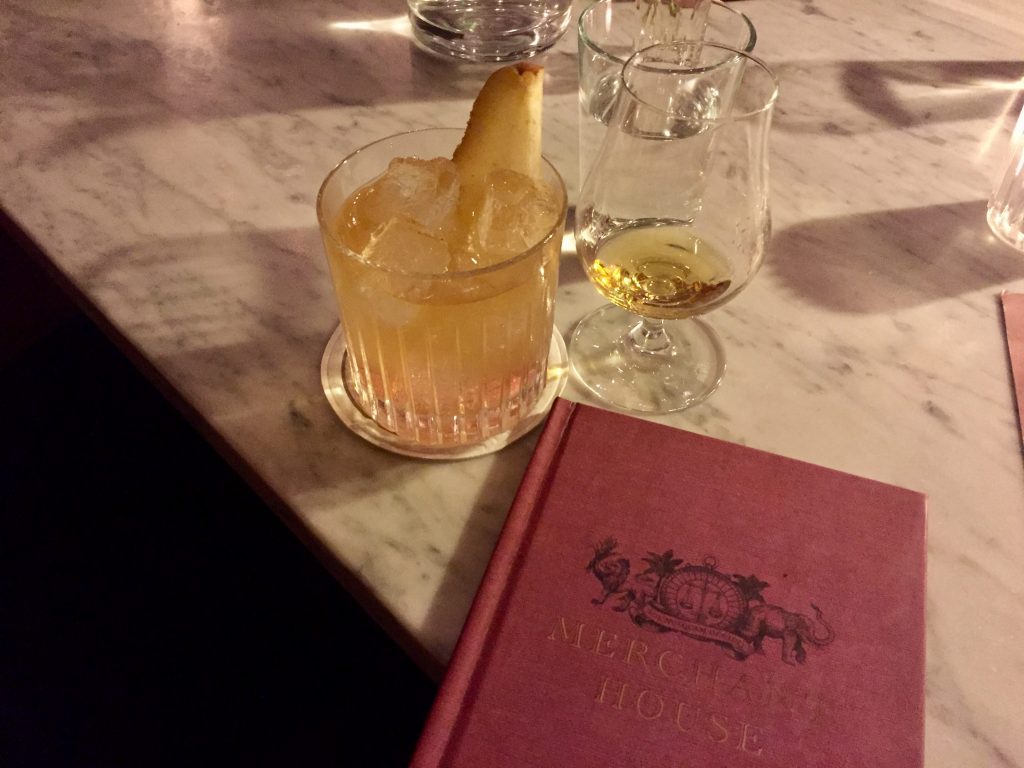 Hidden down an alleyway that looks like it’s only used for lunch takeaways and pub fire exits, this recently opened whiskey bar specialises in bottles from Ireland and the Scottish coast but has an impressive selection from all over the world. The 500-some whiskey bottles line an entire wall, and you’re likely to feel as overwhelmed as a kid in a candy shop when trying to make your pick.

Fortunately, the staff at Merchant House are some of the most friendly, helpful and knowledgeable I’ve ever encountered in London. In addition to our cocktail, we got a separate glass of the whiskey so we could taste it on its own, and when my whiskey nerd friends asked nerdy whiskey questions, they got answers as well as free samples the size of an actual drink.

If there were any journalists left on Fleet Street, they would surely be drinking a stiff one here, if they could get over the pink-painted interior. 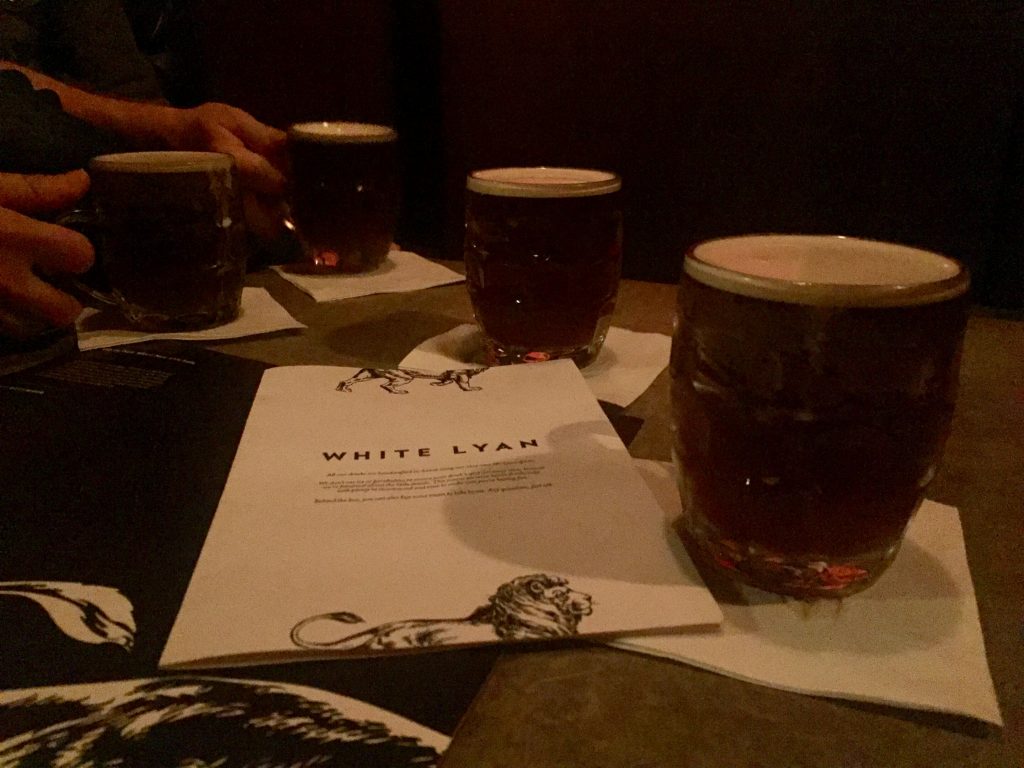 White Lyan first landed on my radar when it was featured on the 2014 list of the World’s 50 Best Bars. Ever since then, I kept promising myself I would get a drink there, and shame on me for taking two years to get around to that.

Some cocktail snobs turn their nose up at this place because every drink that’s served is premixed, and you won’t find any ice, citrus, sugar or Coca-Cola labels here. The mixology magic happens before the drinkers arrive, but you can be sure it continues until the last beat drops.

Tragedy struck our news feeds a few weeks after London Cocktail Week when White Lyan announced that they are sort of closing in 2017 to become a ‘development space’ for the Lyan brand instead of a bar you can waltz into. Make your 2017 New Year’s resolution to get your drink on at this bar while you still can.

* White Lyan has now closed and reopened as Super Lyan, but no doubt the beverages will be just as slick. 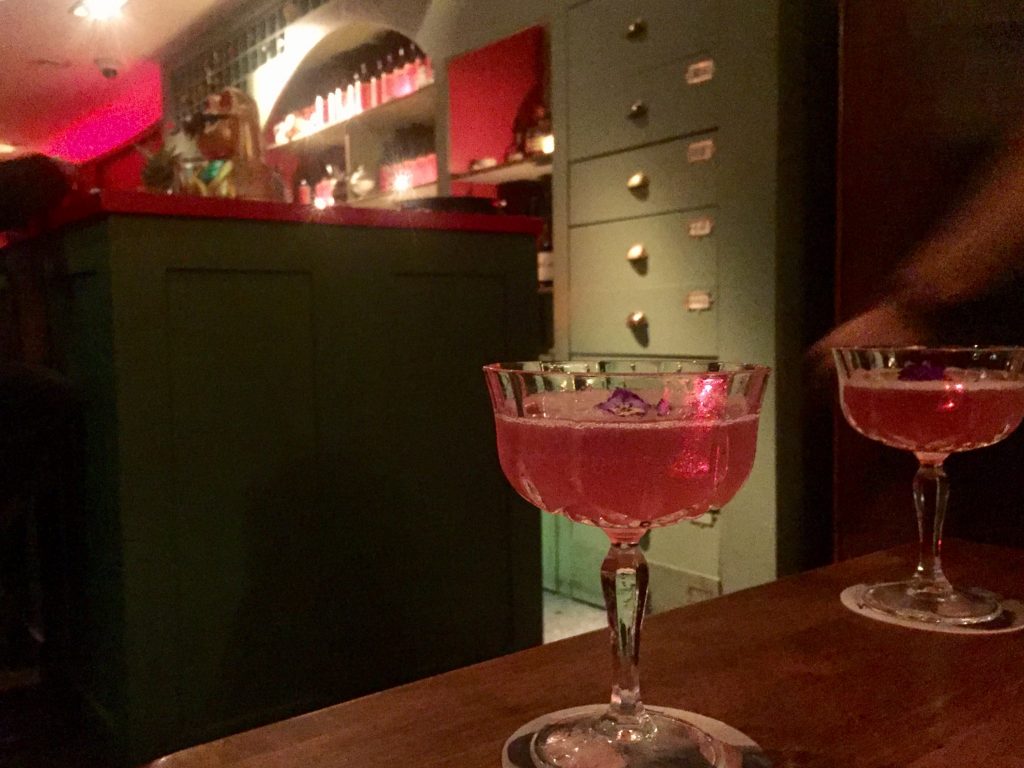 If the London Cocktail Week drink was anything to go by, the beverages at Opium are made with intriguing ingredients, but are, quite frankly, missable. But don’t make the grave error of ordering a drink without food because the dim sum is absolutely divine. The prawn dumplings (har gau and siu mai) were the freshest I’ve ever had, and the mushroom and truffle dumplings were a nice spin on a traditional favourite.

Xiao long bao (soup dumplings) were sadly missing from the menu, but if this place ever combines forces with Beijing Dumpling around the corner, I’m not sure I’d ever be able to eat dinner anywhere else. 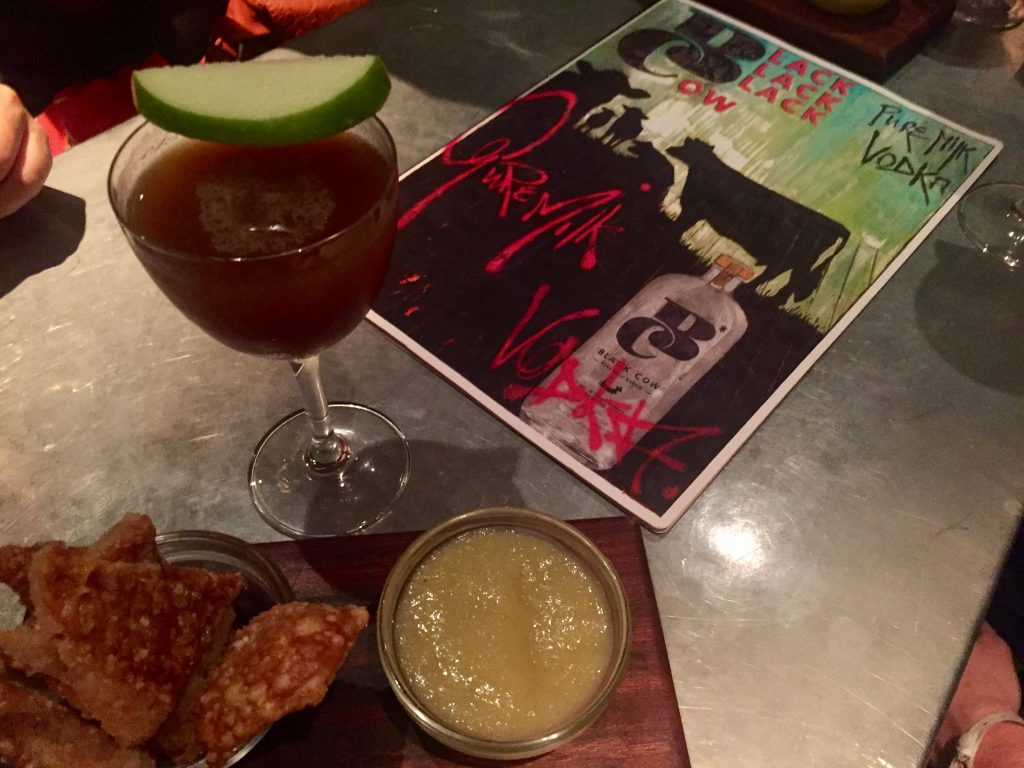 Rocking up at a popular restaurant in Shoreditch on a Friday night without a reservation is a fool’s errand, especially when the hostess asks if you’re there for dinner and looks a little concerned when you say you’re not. Little do you know that that will work in your favour.

We were informed that Tramshed isn’t allowed to serve alcohol without food, and like magic, a few plates of crackling and apple sauce appeared with our drinks. It was an absolute steal for £5, with the added bonus of admiring Damien Hirst’s formaldehyde cow.

Nothing says a quiet Monday and starting your London Cocktail Week off right like the bartender setting the bar alight at Stop #2. The Victorian-style drinking den at Worship Street tops the list of cocktail lovers in London and the globetrotters at the World’s 50 Best Bars agree. The bartenders here are wonderfully friendly and will help you navigate the art piece of a menu and might even let you test out some of their experiments (negroni sorbet, anyone?) if no one else is around. 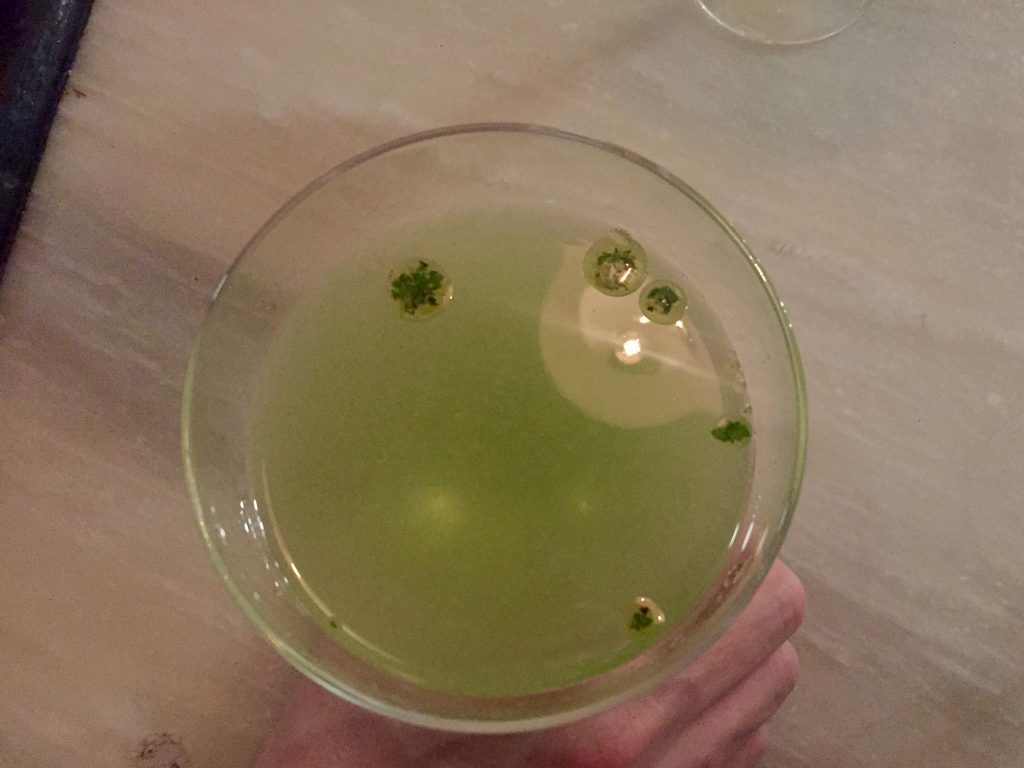 Perhaps the name should have given it away, but it was late that night, and I didn’t listen.

What is going on here. Small bubble packets of parsley drift innocently around the glass until you decide that you want a sip, and then they sneak up on you like tapioca pearls in bubble tea. Except this time you get a taste that should have been sprinkled on the potatoes you had for dinner a few hours ago. 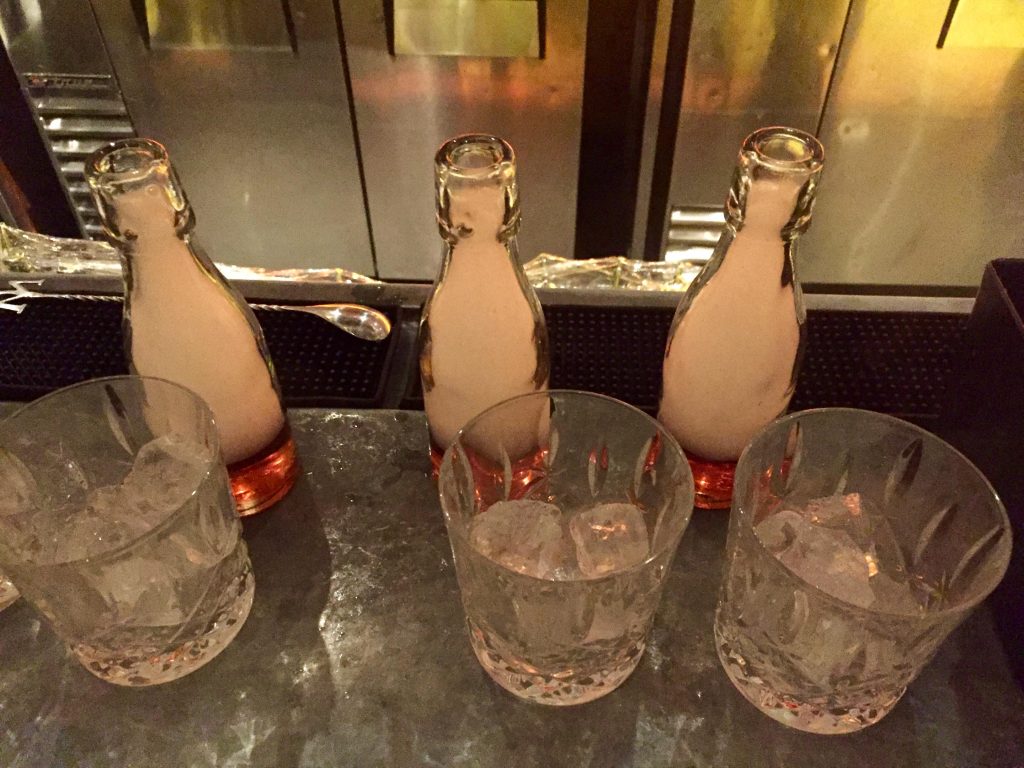 Best Cocktail: The Grill on the Market

The smokey old fashioned has been a staple of the bar at Grill on the Market for the last few years, and you should taste why. An old fashioned is sometimes too much to handle on its own, but mixed with a sweet drip of syrup and an almost homey flavour of wood, you’ll be back at the bar ordering another one in no time. The atmosphere at the Grill is pretty blah, but you can drop by during happy hour for an almost London Cocktail Week-like deal.

Get your own: Grill on the Market, 2 West Smithfield, London, EC1A 9JX. Tube Farringdon. 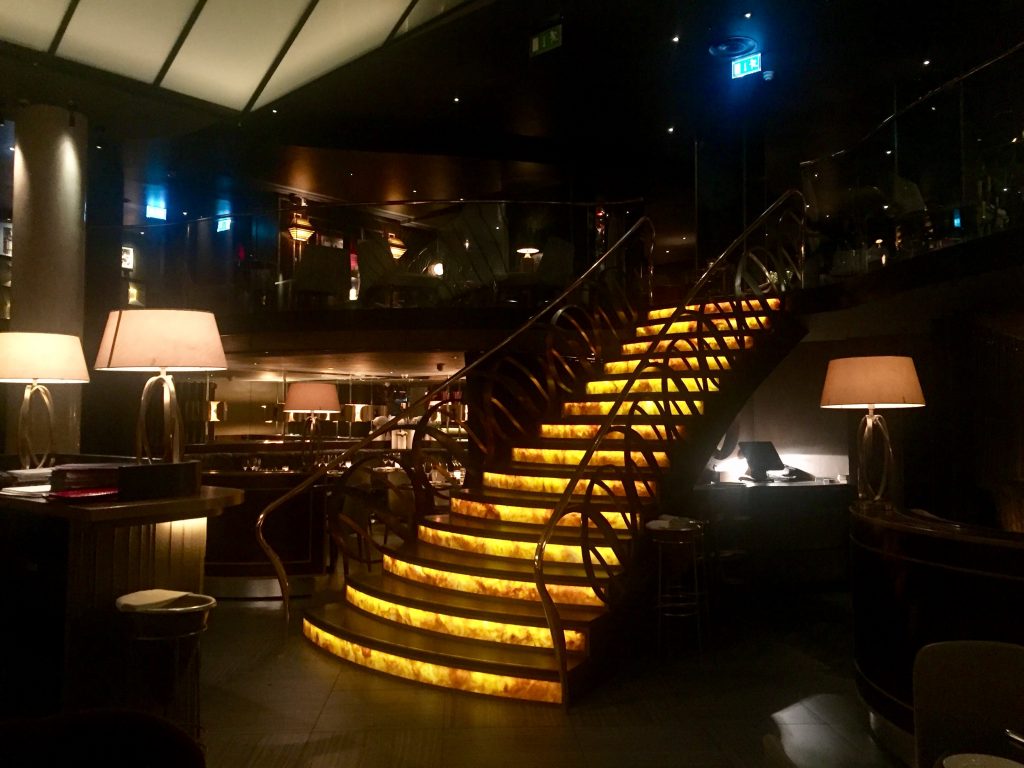 Most ‘Are You Sure We Should be Here?’ Bar: Quaglino’s

There are a few things will set off the discomfort radar of almost every Londoner (born, bred or naturalised), and one of those is being too close to Piccadilly Circus. The opposite sides of the spectrum that this area of London attracts is astounding. You’ll find both the people who think it’s acceptable to visit M&Ms World and people who live in one of the city’s most exclusive and secretive addresses.

Immediately, I’m suspicious of Quaglino’s, which I’ve never heard of and could cater to either side. I can blend in with the M&M dwellers, but I have a harder time putting on a pretentious accent. In we go anyway.

You enter via a dark, muted space that could be the coatcheck before an immaculate ballroom, and then smooth, voluptuous art deco lines carry you down a grand golden staircase to the bar, where a trio of doo-wop singers were crooning to a few tables of suited businessmen. Uh oh, Dorothy, we’re not on the M&Ms side of the spectrum.

But the staff were so attentive and friendly that I started to feel comfortable enough to let my dirty, not-name-brand shoes hang out from under one side of the table. The drink was delightfully fresh, and maybe the touch of absinthe was just strong enough to make me hallucinate that I could inhabit this world. 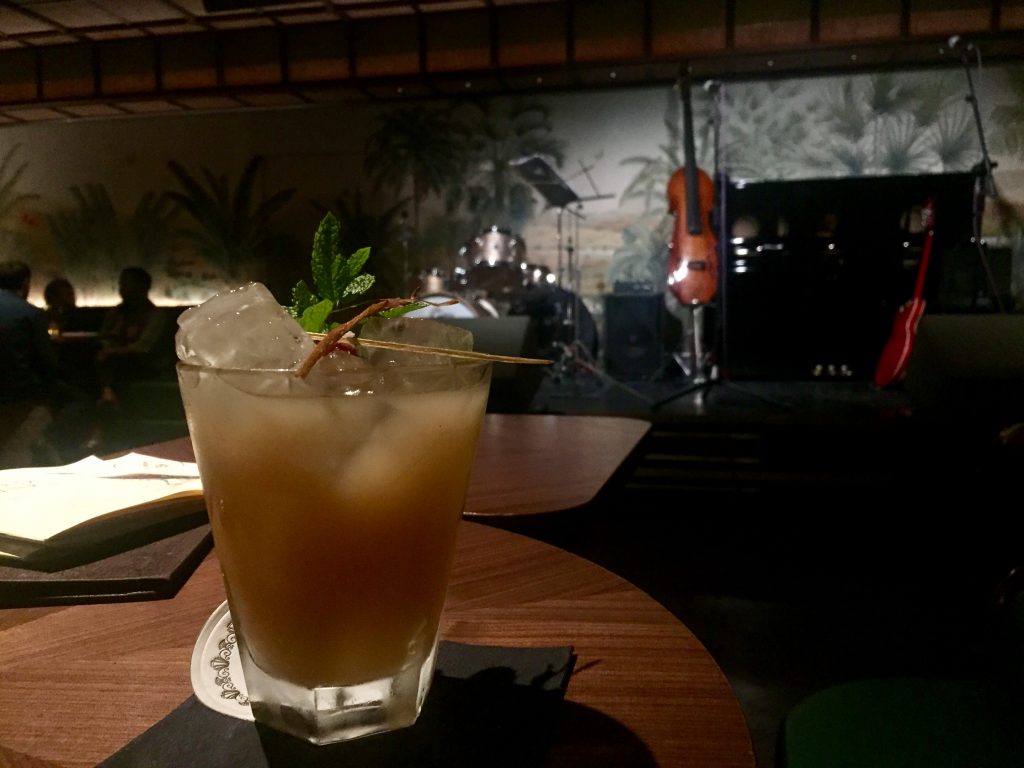 After being turned away earlier in the night, we managed to weasel our way past the bouncer to get in to the darling of London’s cocktail scene, Oriole, hidden away on one of the grimier streets of Smithfield Market.

Okay, fine, so by the time we got in, the live music had finished, the place had pretty much emptied out and the night was inching dangerously closer to last tube, but somehow the bar was still buzzing, the cocktail was perfectly blended and we had the best table front and centre. Oriole is a fantastic addition to any cocktail lover’s to-drink list, but to get the really good stuff, you’ll need to plan it a little better than a shitfaced Smithfields stumble. 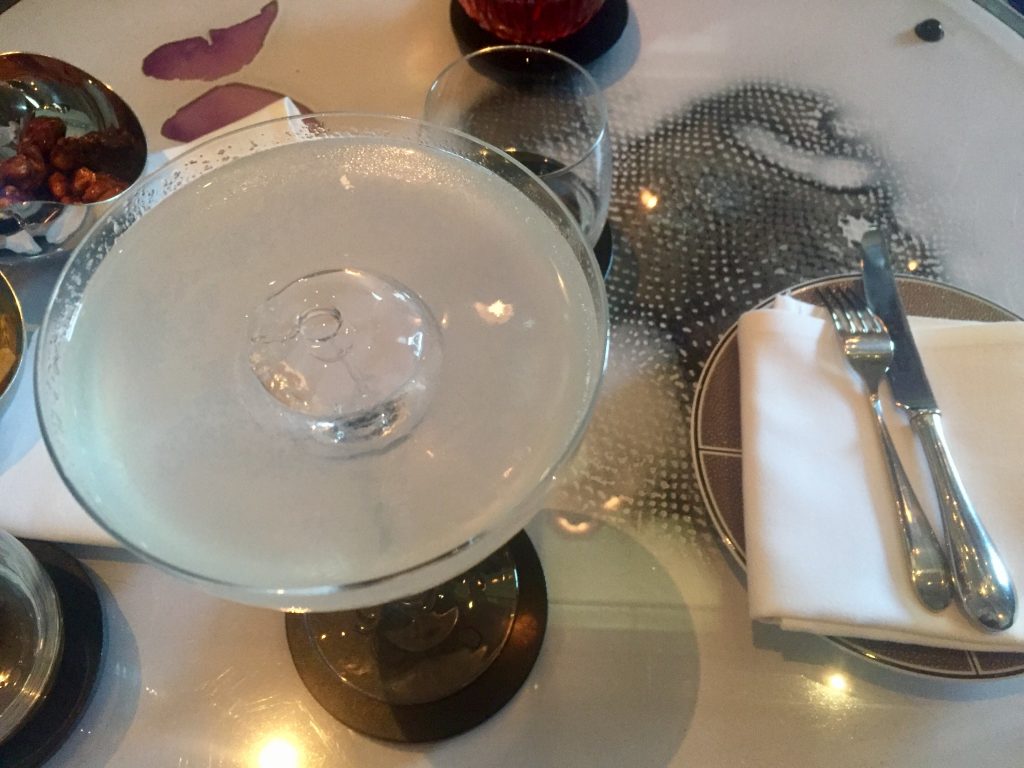 Don’t laugh. Awarding the value award to one of London’s most expensive bars? Hear me out.

London Cocktail Week introduced a new thing this year where for a price slightly above the normal cocktail rate of £5, you could get food paired with your beverage. And seeing how a single cocktail on the Artesian‘s usual menu will set you back at least £18, a cocktail from the former best bar in the world plus a snack for £15 could pretty much be called a bargain.

The London Cocktail Week drink lacked the ooh-aah presentation of the normal menu, where your drink could be served in anything from a foot-long metal ant to a Lego elephant to a hollowed-out rock, but I suppose a bog-standard glass is what you get when you’re just there for the sample. Needless to say, the cocktail, something akin to a fresher margarita, was on point, and the accompanying fish tacos and endless refills of crisps and peanuts were enough to convince us to order the drink in the ant anyway. Damn it, Artesian, just take my money.

GET YOUR OWN: The Artesian at the Langham, 1C Portland Place, London W1B 1JA. Tube Oxford Circus. 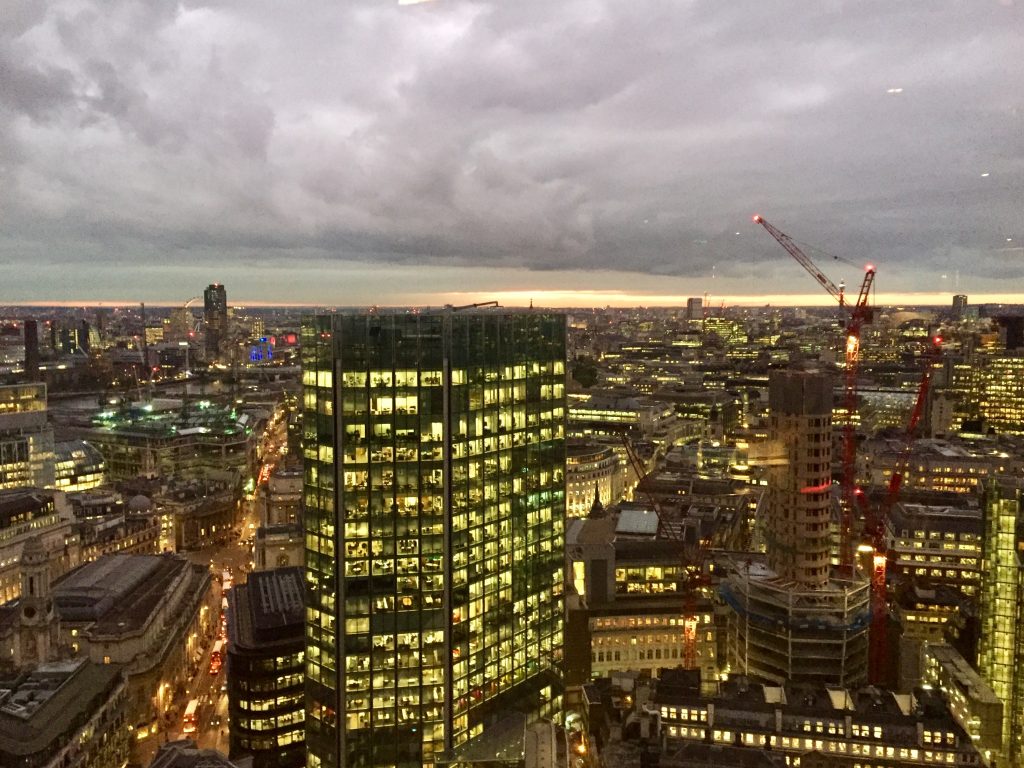 Wave goodbye to another glorious London Cocktail Week from the 25th floor as the sun sets over the city. Cheers. See you next year.